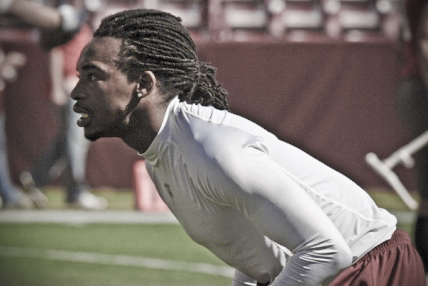 The Washington Redskins made a subtle change to their lineup last week – inserting several younger players into action.

They joined other youngsters, such as linebacker Brian Orakpo, defensive lineman Jeremy Jarmon and guard Chad Rinehart, giving the ‘Skins an infusion of youth that many believe is sorely needed.

While this youth movement is a step in the right direction for the NFL’s oldest roster, it is also bittersweet for a guy like rookie cornerback Kevin Barnes, who finds himself inactive each Sunday.

How tough is it to be stranded on the sidelines while your teammates go into battle each week?

“Man, it hurts real bad,” Barnes said. “Especially for the home opener. I realize its part of the process and that you’ve got to earn your keep, but I’ve got to keep myself from breaking down at the beginning of every game. When the national anthem is playing, I get really emotional. I’ve got to keep my composure and realize the coaches know what they’re doing. All I can do is keep working hard in practice and wait for my time.”

Playing with some emotions isn’t necessarily a bad thing though, right?

“Yeah, but seeing as I’m not playing, there’s no way for me to release it,” he said. “I’ve just got to keep positive because everything is eventually going to work out. I’ve got to keep working at it every day and know that, when I get my chance, I can’t give it back.”

What feedback are you getting from the coaching staff?

“My biggest thing was learning how to practice and play at this level,” Barnes said. “At college, it’s a little different, as far as the way they do practices and everything. Coach [Greg] Blache told me that I’m practicing very good now. I’m going hard every play and trying to show them that they can trust me when I get out there on the field.”

So what do you do during games when you know you’re not going to be active?

“Basically, I take mental reps,” he said. “I mean, I’m in every meeting during the week and I know what we’re doing, just like the starters do. So I’m on the sidelines, standing next to Coach [Jerry] Gray most of the time, looking at formations and the plays they’re calling – stuff like that.”

How sweet is it going to be when you finally crack the lineup and get out on that field?

“Whenever I get out there and whatever spot I get, I promise I’m not giving it back,” Barnes said.

Another player relegated to the sidelines each week is rookie receiver Marko Mitchell. With guys like Santana Moss, Antwaan Randle El, Devin Thomas and Malcolm Kelly ahead of him on the depth chart, Mitchell is also stuck playing the waiting game.

How are you feeling these days, man?

Since you were inactive, the Redskins opted to put the ball in Chris Cooley’s hands early in the third quarter and he responded with a game-changing touchdown. How important was that score?

“Oh, it was huge,” he said. “It was like a huge morale boost for the team. Once he made that catch, it got the crowd and everyone on the sideline back into it. The defense came right out and stopped them, and then when the offense got back out there, another big play happened.”

What can you learn from a guy like Cooley?

“He just does his job,” Mitchell said. “He comes out and plays hard, and shows people why he’s one of the best tight ends in the league.”

You alluded to the big bomb to Moss. What did you think of that play?

“It was real big,” he said. “They’d been double covering him all day and we weren’t able to get him a lot of balls. They finally freed him up and got him one-on-one, he ran a perfect route and Jason threw a perfect ball and you saw the end result.”

How tough is it to watch all this going on knowing you can’t get out there and help your teammates?

“Mentally, I’m paying attention to all the details that go into everything,” Mitchell said. “I’m trying to learn as much as possible from the veterans while I’m waiting for my opportunity to come.”

Both Barnes and Mitchell seem to have the best attitude possible, given their current situation. The coaches are going to go with the players they feel best give the Redskins a chance to win right now. There’s no use bitching or moaning about it. Instead, they’re quietly doing anything and everything to prepare themselves for their moment. Once it comes, you better believe these two guys are going to do everything they can to shine.