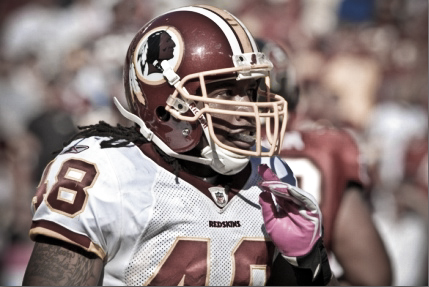 This has been an up-and-down season for Washington Redskins safety Chris “The Predator” Horton, to say the least.

In the Week 1 loss to the New York Giants, Horton was benched in the second half, even though he finished the game second on the team in tackles, with nine. No explanation has been given.

One week later, on third-and-goal against the St. Louis Rams, Horton caused a fourth-quarter fumble that cornerback Carlos Rogers recovered to preserve the 9-7 win in the team’s home opener.

During Week 3, Horton was whistled on a 47-yard pass interference call in the deciding moments of the stomach-punch loss to the Detroit Lions. Adding insult to injury, it was then announced that Horton would be removed from the starting lineup in favor of Reed Doughty.

This week, defensive end Jeremy Jarmon caused a fumble with a pivotal third-down strip and Horton pounced on the loose football to hold off the Tampa Bay Buccaneers. That means that, even though Horton has been relegated to a reserve role, he’s made the play to seal both Redskins victories this season.

“It was just one of those things,” Horton said. “One of our linemen got a hand on the ball and when it came out; I was just running to the football. I truly believe that when I go to the ball, good things happen for me.

“As far as starting, yeah, I was a little disappointed,” said Horton. “But my job here is to do whatever I can to help this team win. Whether it’s me starting or Reed, I know I’m going to get playing time, and when I’m in there, I’m going to do my job. I’m not sitting around like, “Aw, man. I’m not starting, so I don’t have anything to look forward to.’ Guys are still counting on me.”

If you keep making these clutch fourth-quarter plays, you’re only making it tougher for coaches to keep you off the field, right?

“I’m always going to try and make it hard for them,” he said. “I’m going to come out each week, practice hard and compete. If every game from here on out Reed is the starter and I’m the backup, then so be it. I’m going to live with it, come out and give it my all and continue to make plays.”

We’ve got to ask you about an ugly situation involving a blogger on your website calling out Greg Blache, Albert Haynesworth and DeAngelo Hall. Can you explain what the hell happened with that?

“I still haven’t seen what was written,” Horton said. “But to sum it up, I had a contest for fans during the preseason to pick my in-season blogger. We found a guy who did a great job in the preseason, and now, obviously he said some things that I don’t feel that way about. It’s his opinion, but at the same time, once I got word of it I had it taken down immediately. That’s not how I feel, and that’s not the kind of attitude I want to promote.”

Hopefully this is something your blogger will learn from, because something like this is only going to cause an unnecessary distraction to a team already struggling for wins.

“Hopefully,” he said. “Because if not, he definitely won’t be blogging for me anymore. I want to keep my site as positive as can be. Everyone is entitled to their own opinion, but if he wants to do that, then put it on your own website. These are my teammates. I care about these guys and I’d never say something like that about them. If I had something to say about them, I’d say it to their face, not on a website.”