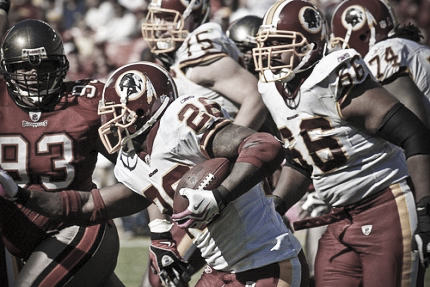 The Washington Redskins held on to narrowly defeat the Tampa Bay Buccaneers 16-13 Sunday. And while the offense was so dreadful for much of the day that the hometown fans booed early and often, sadly, this game actually represented an offensive explosion for the offensively challenged Redskins.

Take a look at the results from the last six games played at FedEx Field, dating back to last season:

First, the positive – the Redskins defense has allowed just 23 total points in their last three games at FedEx Field. Meanwhile, the Redskins offense has scored just 35 total points over the same span. That’s an average score of 11-7, which is fine if you’re a baseball team. Not so much if you make a living playing football.

The Redskins have a total of five touchdowns in their last six home games. Diving deeper into the numbers, here’s a breakdown of the offensive output during this stretch of futility:

We then took things one step further, breaking down the production of Campbell, Portis, Cooley and Moss during this six-game span. The numbers were as ugly as you might expect.

This is the point where we remind folks that Jim Zorn was first hired as an up-and-coming offensive coordinator. Just 15 days later, the Redskins front office then promoted him to head coach. He was specifically brought in because management felt he would be the guy who could help Campbell develop into a solid NFL quarterback.

And yet, 20 games into his coaching career, the Redskins offense has arguably regressed.

The party line in the locker room Sunday was “a win is a win.” But it’s foolish not to notice just how easily this team could be 0-6 at home during this span, if not for above average play from the defense. Fact: the Redskins have scored 17 points or less in 13 of the 20 games Zorn has been here for. The bottom line is simple – something needs to change if Zorn and Campbell are going to remain in Washington.

The day he was hired, we were told Zorn was an offensive innovator. It’d be nice to actually see that translate into more than 10 points a game.