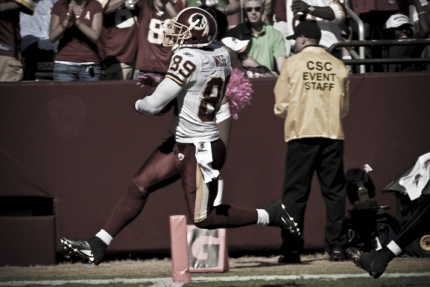 A week after losing to the pitiful Detroit Lions, the Washington Redskins returned to FedEx Field for a matchup with the rebuilding Tampa Bay Buccaneers. While the Lions had history on their side – namely the second-longest losing streak in NFL history – the Bucs might actually be the worse team this season.

One week ago, Tampa Bay got beat down by the New York Giants 24-0 in a game so ugly that they didn’t even get a first down until the third quarter. We’ll say it again – no first downs for an entire half of football.

Most teams would absolutely relish the chance to beat up on a bad Buccaneers squad, but this game was viewed entirely different in D.C.

A win was absolutely mandatory, because a loss meant that the wheels had officially come off the 2009 season. Had the ‘Skins lost, things would have reached a low usually reserved for Steve Spurrier or Richie Petitbon. Conversations wouldn’t focus on “if” head coach Jim Zorn and quarterback Jason Campbell were going to be run out of town, but “when.”

So what happened? Campbell fumbled on the opening drive and Tampa Bay immediately capitalized – with some nobody rookie quarterback named Josh Johnson connecting on an eight-yard pass to a formerly relevant wide out named Antonio Bryant to give the Bucs a 7-0 lead just two minutes into the game. Once again the Redskins went out of their way to ensure an inferior opponent was in the game from the outset.

No sense doing anything the easy way. The rest of the first half was even worse. The Redskins had a total of six possessions in the first half and they resulted in three punts and three Campbell turnovers. The Redskins had just 99 yards of total offense at the half and for the first time, we seriously thought that Zorn should consider bringing in backup Todd Collins to try and get something going. Thankfully, it didn’t have to come to that.

With the Redskins offense missing in action, the team needed someone – anyone – to step up and make a play. That’s when cornerback DeAngelo Hall made the biggest play of the season for the ‘Skins. Johnson dropped back on third down and floated a pass down the right sideline. As soon the ball left Johnson’s hand, Hall broke away from his man and dropped back into coverage to intercept the pass and set up Campbell and the offense with good field position.

Washington had the ball three times in the third quarter and put points on the board each possession. Campbell, the same guy who warranted being benched in the first half, completed seven of nine passes for 110 yards and two touchdowns in the third quarter. But the numbers don’t even do Campbell justice, because both of his touchdown passes were big-time completions.

The first, a rare redzone score, was threaded perfectly to tight end Chris Cooley in traffic. The second, was a 59-yard bomb that hit wide out Santana Moss in stride as he raced down the right sideline for the winning touchdown. A 10-0 dud was suddenly 16-10, with all momentum securely in favor of the burgundy and gold.

If the Redskins are smart, Vinny Cerrato will be on the phone first thing Monday morning attempting to trade for Tampa Bay cornerback Aqib Talib. That’s because the Kansas product intercepted three Campbell passes on the day. To put that in perspective, the only person who caught more passes from Campbell Sunday was Cooley, who had five catches for 65 yards.

Sure, the Redskins had a chance to draft Talib during the 2008 NFL Draft before the Bucs ultimately chose him with the 20th pick. But they don’t like using the draft anyways, so why not offer a handful of draft picks and convert the guy to receiver? He’s already caught three passes from Campbell this year, which is one less than the production of tight end Fred Davis and receiver Devin Thomas combined. We’d say more on the subject, but honestly, we just threw up a little.

As if the Redskins weren’t facing enough adversity, the team was dealt a sucker punch when 2009 MVP Hunter “The Punter” Smith was forced to leave the game with strained groin after his first punt of the day. Which meant kicker Shaun “Shazam” Suisham was called into duty on his behalf, and while his numbers were anything but spectacular – three punts for an average of 26.7 yards and a long of just 32 – his performance was huge. Especially when you find out Suisham last punted in a game situation back in high school.

So yeah, while we despise Celine Dion, we hear Canadians love her. And since the Canadian kicker got the job done when the team needed someone from the bullpen, we’ll turn the volume down a little and let him enjoy his national anthem.

5. “Bouncin’ Back” by Mystikal

This was not a great week for safety Chris “The Predator” Horton. First, he becomes the fallguy for the team’s disappointing start and gets pulled from the starting lineup in favor of Reed Doughty. Then, some jackass fan who writes a blog on Horton’s website thought it was appropriate to call out defensive coordinator Greg Blache, defensive tackle Albert Haynesworth and Hall. Nevermind the fact that we’re completely convinced Haynesworth is unstable. An athlete (not named Terrell Owens) never calls out a teammate. And sure, the guy who wrote this is a nobody … but he wrote it on Horton’s site. Which makes Horton look bad.

So yeah, this was not the best week ever for “The Predator.”

And even though he played less snaps than usual, Horton made his time on the field count. And for the second-straight home game, when the Redskins needed one play to preserve the victory, Horton stepped up. Defensive lineman Jeremy Jarmon stripped the ball loose from Tampa Bay running back Clifton Smith and Horton dove on the ball. Game. Set. Match.

At this point, the Redskins have two legitimate playmakers in the secondary – Horton and Hall. When either is near the ball, good things happen. And the more plays Horton makes, the harder it’ll be for coaches to keep him off the field.