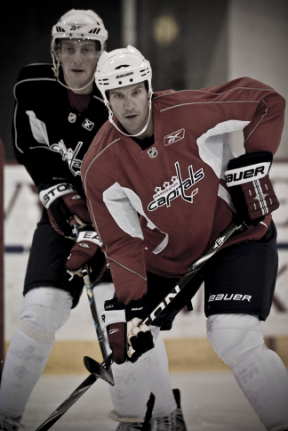 Opposing defensemen hate playing against a guy like Mike Knuble.

He’s not brash. He’s not cocky. He’s not flashy. He simply stands in front of the crease and fights for any loose puck that comes his way, kind of like a garbage man on skates.

That’s how the 37-year-old forward has made a living in the NHL. By planting his 6-foot-3, 230-pound frame near the goal and playing power forward. Last season, Knuble scored 27 goals and 20 assists for the Philadelphia Flyers. His goals rarely end up in the highlight reel, but they’re the kind of tallies that win playoff games.

Conveniently for Washington, he’s exactly the kind of player the Capitals lacked one year ago. Led by Alex Ovechkin, Alexander Semin and Mike Green, the Caps can outskate and outscore most teams in the league. Unfortunately, none of those players really cares to crash the net, which explains why the Capitals’ front office moved quickly to sign the blue-collar free agent.

And judging by the comments from Caps defensemen, they couldn’t be happier to be playing with Knuble instead of against him.

“He’s one of those tough players who always plays in front of the net,” said defenseman Mike Green. “He’s a big guy who plays very solid, so it’s hard to move him. And he’s good with his stick – I think he had 30 goals last year, and I’m sure not very many of them were because he dangled out of the corner and scored. He just battles in front of the net. That’s something we need on this hockey team, and he’s going to bring that element.”

Judging by his preseason production (four goals and one assist), Knuble seems to be fitting in quite nicely, huh?

“He’s going to fit in great,” said defenseman Tom Poti. “He’s a guy I’ve been playing against for a number of years. He’s a hard worker in the corners. He sticks that big body in front of the net and gets a lot of dirty goals. He’s fitting in great with the guys. He’s a veteran in this league, and he’s jelled with the guys in the room. We’re very excited to have him here.”

“He’s done a good job and you have to give kudos to him,” he said. “It’s always tough coming to a new team because you don’t know what to expect, but he seems to fit right in.”

“He makes it tough on the defense,” said Poti. “He’s such a big body and he just plants himself there. He’s a heavy guy and he’s pretty strong, so he’s tough to move in there – especially with the new rules and regulations in the league. You’ve got to let him stand there. He’s a tough guy to play against, but a great guy to have on your team.”

“Oh definitely,” Poti said. “He’s going to park himself in front of the net and teams are going to have to pay attention to him. With the other skill guys moving around making fancy plays and passes and him in front of the net, the goalie isn’t going to see too many shots on net. I’m looking forward to seeing a lot of goals from him and his linemates.”

Knuble has had at least 20 goals and 45 assists in each of his last six seasons. He rarely misses games and logs a ton of minutes every night. Fans anxious to see him in action with the Caps should look no further than the other team’s net. He’ll be there, whether opposing defensemen like it or not.