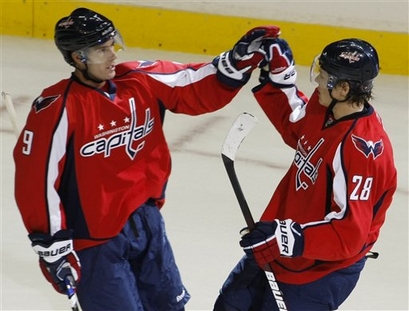 The Washington Capitals begin their quest for the franchise’s first-ever Stanley Cup tonight in Boston against the Bruins. While last year’s roster remains largely intact, there are a few new faces in the lineup. With that in mind, we sat down with center Brendan Morrison to help Caps fans get to one of the new guys.

First of all, welcome to Washington. If you could, tell us a little bit about yourself and your game.

“Thanks. I’m excited about being here,” Morrison said. “This is a really good team with a good, young core of guys. I believe this team has a chance to win. Myself? I think I bring a little bit of a veteran presence. On offense, I’m more of a passer than a shooter, but I’m a guy who can finish as well. I like to think I’m solid defensively.

“Throughout my career I’ve been on the powerplay, I’ve killed penalties and I just want to go out and play solid hockey,” he said. “The last few years I’ve had to deal with a lot of injuries. I just want to get back on track, have a good year and help this team win any way I can and have some fun while I’m doing it.”

What, if anything, has coach Bruce Boudreau said to you about your role on the team?

“We’ve had a couple of good talks,” Morrison said. “The key is just being healthy. I told him I do feel healthy. Last season I wasn’t, but I feel good now. He said they expect me to get back to being a guy who is an offensive producer and a guy who is a threat on a nightly basis. I’m all for that and I feel that can definitely happen. I played on some pretty good teams in Vancouver, but this team has the most skill I’ve ever been a part of. I’m going to try and be a leader, as much as I can, and contribute.”

You really think this team is one of the most talented you’ve been a part of?

“Yeah, for sure,” he said. “If you’re talking purely skill-wise, it’s easily at the top – and I haven’t even played a game yet. I’m just watching in practice what these guys can do with the puck and yeah, there’s a lot of skill in this room.”

What you’re saying is it wasn’t a tough choice to come to the Caps in free agency, huh?

“It really wasn’t that difficult of a decision,” Morrison said. “I talked to a few teams on July 1st, but once I heard that Washington was interested, I told my agent, ‘Let’s get something done.’ I like this group. They’re a tough team to play against and for me personally, it’s a great chance for me to come in and play with some really talented wingers. I think their talent level is unparalleled in this league, so it should be fun.”

As a guy who likes to pass, you’ve got no shortage of options in guys like Alex Ovechkin, Alexander Semin, Mike Green and others. It’s got to be a good feeling to know you basically just have to look up, see someone in a red sweater and once you make the pass, it’s probably going to earn you an assist, right?

(Laughs). “Yeah. They score a lot of goals, so it should be fun,” Morrison said. “With the addition of Mike Knuble as well, and Brooks Laich has back-to-back 20 goal years, Tomas Fleischmann is another young guy who can score. We’ve definitely got a good mix of guys.”

So what does this team have to do to get to the promise land?

“Well, I think we need to play a few regular season games to see exactly, but offense is no issue,” he said. “We can score goals. I think one thing we can get better at is learning how to win tight games – especially late in games. Instead of always being on the offensive, there’s times when you have to be a little cautious and make the smart play. That’s something you have to learn as a team, and that’s the kind of stuff that could put us over the top.”