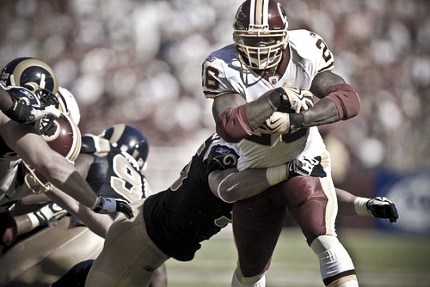 One week ago, for reasons that remain unclear, the Washington Redskins coaching staff saw fit to replace safety Chris “The Predator” Horton in the lineup against the New York Giants. No explanation was given, and honestly, no one really made an issue out of it – even though, in his limited playing time, Horton still racked up nine tackles (second best on the team, behind only middle linebacker London Fletcher’s 18 tackles). They felt more comfortable using other players and Horton was left stranded on the sidelines for much of the second half of the 23-17 loss.

Fast forward to the home opener against the St. Louis Rams. Horton may be a quiet guy, but he’s got a lot of pride, and those who know him were fairly confident he’d make a statement with his play. Boy did he ever. On a day when points were at a premium, Horton made two big-time plays in the fourth quarter to ensure the ‘Skins earned their first win of the season, 9-7 over the St. Louis Rams.

Horton’s first game-saving play came on the Rams’ first drive of the fourth quarter. On third-and-goal, the talented safety forced a fumble in the red zone, which Carlos Rogers recovered. The second play, which came after the Redskins offense stalled yet again, sealed the win for the burgundy and gold.

On fourth-and-10, Rams quarterback Marc Bulger threw a pass deep down the right sideline to wide out Donnie Avery, which Horton defended beautifully to preserve the win. The play was eerily reminiscent of the 43-yard pass Bulger to Avery a year ago that enabled the Rams to kick a crushing fieldgoal in one of the low points of the 2008 season. The take-home message – Horton is better than Leigh Torrence. And more importantly, the Redskins are better with Horton on the field.

At times, the Redskins offense looked like the real deal – moving the ball up and down the field with quick passes up the middle and well-timed running plays. They had the ball for just under 35 minutes, which was 11 minutes more time of possession than in Week 1, and finished the day with 362 yards of total offense.

Unfortunately, for whatever reason, the offense was simply incapable of scoring in the red zone. The official stat sheet says they went 0 for 5 on the day. The offensive line and fullback Mike Sellers got no push on running plays, meaning running back Clinton Portis was seemingly fighting for his life every time he got the ball in the red zone. The passing game was plagued by dropped passes and inconsistent play.

When Portis threw a red-zone pass intended for tight end Chris Cooley, it reeked of desperation. When coach Jim Zorn elected to go for it on fourth-and-goal from the two yard line with two minutes to play, the Redskins actually lost yards on the play. Had the Redskins defense not been up to the challenge, we’d be sitting here discussing an inexcusable home loss to a previously winless Rams team for the second straight year.

Last week punter Hunter Smith provided the bulk of the team’s scoring on a well-designed fake fieldgoal run just before halftime. This week, it was all kicker Shaun Suisham. Typically the only time kickers receive attention is when they screw up (does the phrase “wide right” mean anything to the good people of Buffalo?) So for that reason, we wanted to formally recognize Suisham for ensuring the Redskins weren’t shut out against a doormat opponent like the Rams.

The Redskins front office, for reasons that will never be explained, opted to go into the 2009 season with an old and fragile offensive line. Tackle Chris Samuels was coming off of a season-ending injury and guard Randy Thomas has seemingly been injured for most of the time he’s been on the Redskins’ payroll. But instead of investing a draft pick or two on what is universally thought to be the team’s biggest weakness, the team decided to roll the dice hoping the return of guard Derrick Dockery in place of Pete Kendall would be enough to help the team get by.

But let’s turn our attention back to Thomas. He missed most of the 2007 season with a left triceps injury. He played all 16 games in 2008, but did so with a herniated disk in his neck which required off-season surgery to repair. And now, it looks as though he’s done for the year with a right triceps injury. Whether it’s bad luck, old age or a combination of the two, Thomas is now back to wearing a baseball cap and sweatpants on gameday. And the team is now left scrambling to find a replacement via free agency or trade unless Chad Rinehart shocks the world and proves he’s actually ready to become an NFL player.

5. “Can’t Tell Me Nothing” by Kanye West

Kayne West has done a lot of ignorant things during his career, but it’s safe to say his recent stunt at MTV’s VMAs takes the cake. Storming onto the stage in a drunken stupor during what should have been a highlight of a 19-year-old girl’s life is inexcusable. In related news, several “fans” of the Washington Redskins saw fit to boo their own team during the final moments of the game Sunday afternoon – which is fine … until you remember that the Redskins won the game.

Look, we fully appreciate that every team in every sport goes through the charade of saying “We have the best fans in the world,” and it’s almost always bullshit. Redskins fans have heard it for so long, that many actually believe it – evenly though their “sold out” stadium has large sections that are regularly vacant on gameday. Or the fact that a team like the Pittsburgh Steelers can roll into town and pretty much take over FedEx Field for the evening. Or the fact that they think the wave is socially acceptable. They’ve heard it for so long, it must be true.

A year ago, there was such a large contingency of clueless ‘Skins fans that the team had to create a video package – complete with “Shhhhh”-ing sound effects – instructing the mouth breathers in attendance to shut up when the team’s offense has the ball. So really, yesterday’s events aren’t out of character for the vocal minority. But that doesn’t make it right when fans boo and throw debris onto the field as the home team is jogging off the field after winning the game.

Let us be perfectly clear on this – there is never a reason for fans to boo their team after a win. When you hear stories of this type of behavior, it’s almost always about the Philly faithful. But at least they’re consistent. As far as we’re concerned, the actions of the portion of the Redskins fanbase who saw fit to boo and throw stuff at players was just as classless as Kanye West. President Obama might even call them jackasses.