cut to the chase 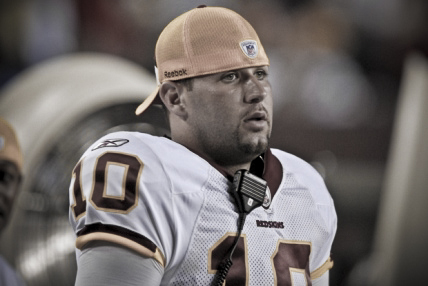 The preseason has come and gone and now there is just one thing left to do before the NFL season kicks off – roster cuts.

The Washington Redskins, like every other team in the league, must tell 22 players they’re simply not good enough in order to get their roster down to 53 by Sunday.

Some choices are easy. Many are not.

Jason Campbell and Todd Collins will remain in town. But Chase Daniel and Colt Brennan both went to bed Friday night hoping that they’d shown the Redskins coaches enough to stick around. Neither Shaun Suisham nor Dave Rayner can know for sure which kicker will survive through the weekend. Dominique Dorsey, Anthony Alridge and Marcus Mason each remain hopeful that they’ll make the trip to New York next weekend to take on the Giants.

While the only opinions that truly matter on the final roster are those that come from the Redskins front office (scary, huh?), we figured we’d add our two cents on some of the few roster spots worth debating.

First of all, if it were up to us, Daniel would make the team over Brennan. Nothing personal against Colt – we’ve just liked what we’ve seen from Chase this preseason. He’s a tough guy, who can move around in the pocket and make tough throws. Brennan’s biggest problems these days, for whatever reason, seem to be in his head. He’s a very likeable kid and could very well one day be a legitimate quarterback at the pro level, but this preseason he’s doing his best Patrick Ramsey impression – getting sacked routinely and throwing mind-numbing interceptions.

The play that sealed it for us was Daniel’s touchdown pass to rookie wide out Marko Mitchell in the final minute of the game at Jacksonville. Having just seen the referees take away what appeared to be a touchdown pass to tight end Todd Yoder, Daniel calmly jogged back out onto the field on fourth down and threw a perfect four-yard touchdown pass that only Mitchell could catch. The Redskins, as anyone familiar with the recent years can attest, struggle mightily in goal line situations. But Daniel and Mitchell made it look easy. With points being so hard to come by over the last year or so, stuff like that can’t go unnoticed.

As far as the kicking situation goes, if it were up to us, the job would go to Rayner. Not because of anything we’ve necessarily seen from him – after all, he’s only one for one on fieldgoal attempts (and it was just a 26 yarder). But we’d give the nod to Rayner because we’re of the mindset we’ve seen what Suisham has to offer and it’s simply not good enough. Yes, he converted a 48 yarder last night, but how many Redskins fans were honestly confident he’d put it through the uprights as he lined up for the attempt?

Last season, statistically speaking, Suisham was one of the absolute worst kickers in the league. And that’s just his fieldgoal attempts. Last night, we watched his kickoffs drop around the 10 yard line, which made it all too easy for the Jaguars to start each drive with good field position. Suisham is a likeable guy and we’ve enjoyed talking hockey with him, but the truth is the Redskins don’t have a large margin of error, and this guy is too much of a liability to trust heading into another season.

As for the running backs, we went into the final preseason game pulling for Alridge. And then he coughed up a terrible fumble in the early stages of the game that was returned for a touchdown. Instead of trailing 3-0, the ‘Skins were suddenly down 10-0 before the offense ever took the field. Again, the Redskins aren’t good enough to be able to overcome many of these avoidable mistakes.

It would have been nice to have a speedy little change-of-pace back in the mold of Darren Sproles or Leon Washington, but we simply don’t trust Alridge to hold onto the ball. For that reason, we’d give the final spot to Mason. It’s impossible not to like the kid and he’s going to give everything he’s got every time he touches the ball.

One player who wasn’t on the bubble, but who we’d feel obligated to address is Mitchell. The seventh-round pick looked absolutely dreadful during minicamp as he dropped pass after pass. But he’s consistently improved since then and ends the preseason with three touchdown catches (which, if we’re not mistaken, matches the last decade of James Thrash’s career). Sure, the guy will enter the season as the fifth receiver, but we’re here to say this kid should be active on gameday.

In the immortal words of the Worldwide Leader, “All he does is catch touchdowns.” Even if you can only get him on the field for a handful of offensive plays, Mitchell should be rewarded for his steady progress and his ability to haul in touchdowns. Good teams and good coaches find ways to use players like Mitchell. Let’s hope that’s the case for Jim Zorn and the Redskins.

Now that we’ve said all of this, we fully expect the team to stick with Brennan, Suisham and others we could make an argument against. They very well might feel that Brennan and Daniel played to a tie this offseason and preseason, and if that’s the case, the tie goes to the guy with tenure.

The chief reason a player should make the final 53-man roster is because he gives the Redskins the best chance to win football games. If Vinny Cerrato and friends think Brennan, Suisham and Alridge fit that description, so be it.

We just hope that if Daniel gets cut, the rumors are true and he’s already lined up his next career move – playing Ben Roethlisberger in a made-for-TV movie titled “Church Ladies Gone Wild: The day God sent a minivan to gun down an NFL quarterback.”