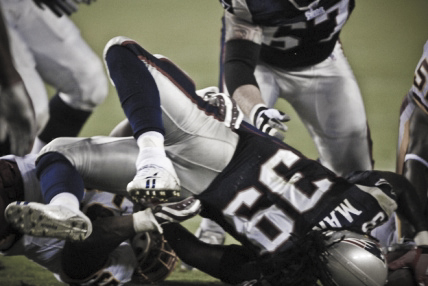 It goes without saying that football is a physical sport.

Roughly seven minutes into the game Friday night, this was emphatically reinforced when Washington Redskins linebacker London Fletcher delivered a crushing blow to New England Patriots running back Laurence Maroney (as seen above).

Our initial reaction when we saw the photo was – damn, all that for a two-yard gain? But then we got to thinking – how would Redskins players react to the image? We decided to have a little fun in the post-game locker room. We simply walked up to a player, showed the photo and asked him to describe what he saw.

“I see a hit like that and I think it’s fantastic,” said defensive end Andre Carter. “That’s just fantastic. As Marcus Washington used to say, ‘That’s Riddell on Riddell.’ And on that play, the Redskins’ Riddell got the best of the Patriots’ Riddell.”

Some players saw the hit as a possibility of things to come.

“I see a very hurt Patriot and a very happy Redskin,” said cornerback Fred Smoot. “That’s the image we want to have for our defense – very physical. We don’t care about all the other accolades. We just want to be very physical. We want offenses to know that when they play us, they gonna get hit.”

Is the body meant to bend that way?

“No, man,” he said. “That’s what football does. You get bent in ways the body can’t go, but we bounce back. We’re athletes.”

Some players saw the play as a missed opportunity.

“That play, the ball actually came out,” said safety Chris Horton. “I tried to get it, but he somehow stuck his arms out there and got it back. But that was a great hit by London, and it shows why he’s our leader on defense.

“He’s a smaller guy, so he can get up under a lot of these running backs,” Horton said of Fletcher. “When he brings it, he definitely delivers a nice blow. That picture right there, it says it all. And I’m sure that guy is going to be feeling that hit on the plane ride home.”

And what was Fletcher’s reaction when he saw the image of Maroney being dumped on his head? He laughed.

“Well, it looks like he’s definitely not in a great position,” Fletcher said. “It was a big collision. I wish I could have kept my feet under me even better. It was a big collision, and that’s a great picture. I just try to use my leverage and deliver a big hit. I wish we had recovered the football though.”

And then there’s safety LaRon Landry.

“Dang,” Landry said. “Ass all up in the air. Head all in the ground. Can I really say what I want to say?”

Yes he did, LaRon. Yes he did.