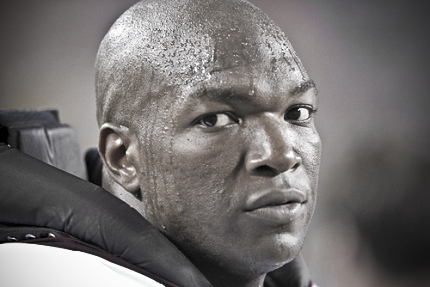 Ladies and gentlemen, it’s time for the sixth-annual “Why your team won’t win the Super Bowl” column. So head to Las Vegas and put money on it – this is why your favorite football franchise won’t get it done this year.

Arizona Cardinals – I don’t care if he bagged groceries for Jesus Christ himself, Kurt Warner will not stay healthy for the entire 2009 season.

Atlanta Falcons – Matt Ryan, Michael Turner and friends snuck up on the league a year ago. You’ve got a better chance of spotting a pair of underwear on one of The Real Housewives of Atlanta than seeing the Falcons surprise the rest of the league a second time.

Baltimore Ravens – Other than The Wire, name something noteworthy to ever come out of Baltimore. And you’re not allowed to say herpes.

Buffalo Bills – The career of Terrell Owens is amazingly easy to break down. All you need is a quality quarterback and T.O., and he’s good for two things – elevating your offense to new heights while simultaneously driving your QB crazy. Buffalo brings an intriguing variable – they don’t have an NFL-caliber quarterback. What happens now?

Carolina Panthers – The last time we saw Jake Delhomme, he completed 22 out of 34 passes he threw. Unfortunately for Carolina, five of those completions were to Arizona defenders. Unfortunately for 2009 Panther fans, Delhomme is still your starting QB.

Chicago Bears – Great idea acquiring Jay Cutler. If only someone in the front office thought to bring in a capable receiver or two to go with him.

Cincinnati Bengals – It can’t be good when Chad Ochocinco has been a better teammate over the last year as a back-up kicker than he ever was as a receiver.

Cleveland Browns – If the Brownies had acquired Mike Vick, folks would have at least tuned in to see what happened the first time he came anywhere near the Dawg Pound.

Dallas Cowboys – Only in Dallas can you build a billion-dollar stadium with an illegal video board.

Indianapolis Colts – What has the world come to when Marvin Harrison is waiving a gun around?

Jacksonville Jaguars – Maurice Jones-Drew is a great all-around back, but someone has to give him a breather from time to time. With Fred Taylor (and groin) now in New England, who fills the void?

Kansas City Chiefs – Dear Matt Cassel, Dwayne Bowe and Bobby Engram are not Randy Moss and Wes Welker. But what do you care? You got paid.

New England Patriots – Honestly, what have the Patriots won since they got caught cheating and had to start playing by the same rules as the rest of the league?

New York Giants – Eli Manning makes more money than Peyton Manning. Karma alone will keep the Giants from winning it until this egregious foul has been corrected.

Oakland Raiders – Because they’re the Raiders.

Pittsburgh Steelers – Big Ben gets sacked so often, even whores can bring him down.

San Francisco 49ers – Wide out Michael Crabtree is holding out because, even though he was picked 10th overall in the NFL draft and Darrius Hayward-Bey was picked seventh, he feels he should make more money than DHB because he was “ranked higher on mock drafts.” Seriously, you can’t make this up.

Seattle Seahawks – Like grunge, Matt Hasselbeck was relevant a decade or so ago.

St. Louis Rams – Chris Long has his father Howie’s ruggedly-handsome looks. So at least he’ll have that going for him when his team is losing by double digits each week.

Tennessee Titans – With Albert Haynesworth gone, who will be the man to step up … on a Dallas Cowboys’ face?