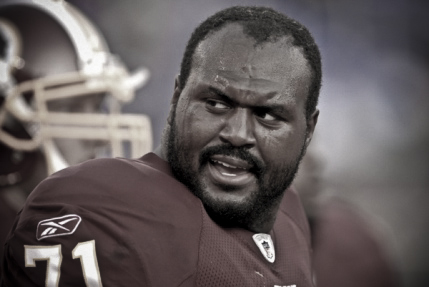 Unquestionably, the feel-good story of 2009 for the Washington Redskins is offensive tackle “Big” Mike Williams. After being out of the league for more than three years, Williams was given one last chance to prove he’s still NFL worthy.

When he came into our lives, the man affectionately known as BMW weighed in at more than 450 lbs. Since then, he’s dropped more than 100 lbs. (basically the equivalent of a supermodel holding a fat baby) and shown he’ll do whatever is necessary to reward the ‘Skins for giving him this opportunity.

Although he didn’t play against Pittsburgh last week due to an ankle injury, we caught up with Williams to check in on the big guy. As always, he was a pleasure to chat with.

Hey Mike, we know you’re anxious to get back out there on the field. How’s everything coming along?

Preseason or not, we know you want to be out there. What do you do on the sidelines for three hours when you know you’re not going to play?

“Golly,” he said. “I just try to encourage guys on the field. I also make sure I know what the calls are while I’m watching the guys on the field and go through mental reps throughout the game. We’re going to play New England, and they run a 3-4 too, so their base defense is a lot like Pittsburgh’s. So it would be wise and veteran-like to get out there and pay attention … and also get some rehab in too.”

When you’re talking about taking mental reps, what does that entail?

“Going through the plays and blocking schemes,” Williams said. “You know, we can see what formations the defense is in – are they in base, in nickel? – and just kind of going through your steps and your assignments. It’s just like you’re picturing yourself in the game. If you see a linebacker shift or walk up to the line late, what do you do within the time before the ball snaps? That’s the kind of stuff you go through in your mind.”

So did you have a good mental game against the Steelers?

(Laughs). “Yeah, I had a good mental game,” he said. “Of course, it’s a little different when you’ve got the bullets flying at you, but you’re just doing it to make sure that you’re not losing a step because you’re not playing. You’ve got to get your mental reps.”

You’re a unique case, man. You haven’t been in town very long, but seemingly the entire fanbase is already cheering for you. Can you update us on the weight loss?

How on earth do you do it?

“Really, I’ve just been working out,” Williams said. “Now, I’m just kind of maintaining. My body is into a routine with what weight I want to sustain and stuff like that, so it’s not really hard. We still work out and everything, and obviously being out there on the football field in the hot sun keeps it down a lot.”

Is there anything on the menu that you’re missing these days?

“Um … not really,” he said. “There were just a couple things that I needed to let go, and I let go. It’s just kind of easy now. I’m used to the routine I’m in. It’s a life-changing kind of deal. What I used to eat back then, I don’t have a taste for anymore.”

And honestly, Williams has got this mental thing down so well, if he misses junk food, he can just mentally dig in. Spending a few minutes with him quickly reminded us why he’s so beloved already. The guy is one of the most positive athletes we’ve ever come across and his personality is downright contagious.

With cuts on the horizon, here’s hoping Williams is able to get back on the field this weekend against the Patriots and is able to show the coaching staff he’s deserving of making the final roster. The moral of this story is simple – we need more guys like Williams in this town. Not less.