orakpo is no rookie 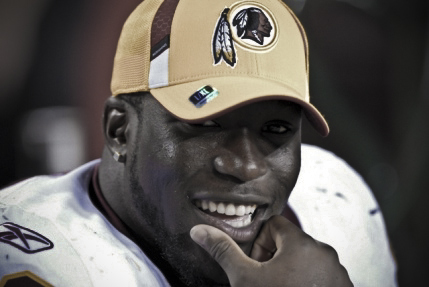 Okay, seriously, this is getting absurd.

How long did it take for folks to start whispering and wondering about Danny Almonte, the imposter who pretended to be a little leaguer years ago?

We don’t care what the paperwork says, Brian Orakpo isn’t a rookie.

First it was teammate Chris Samuels who was humbled by the former Texas Longhorn during one-on-one training-camp drills. This past weekend it was Max Starks, the starting left tackle for the Super Bowl champion Pittsburgh Steelers, who couldn’t keep up with the Washington Redskins first-round draft pick.

In just two NFL preseason games, Orakpo has already shown the league that opposing offenses need to either a.) double cover him or b.) deal with the consequences. And honestly, how do you consistently double cover him when you still have to contend with guys like Albert Haynesworth? There’s a reason the usually no frills Greg Blache was reportedly seen smiling during this past offseason. Teams aren’t allowed to trot out enough players to shut down all the weapons the ‘Skins seem to have.

When Steelers quarterback Dennis Dixon fumbled a snap on a third-and-long in the second quarter, it wasn’t because of a poor exchange with the center. Dixon was in such a hurry to roll out of the pocket away from Orakpo, that he almost forgot the football. The young quarterback had to scramble just to recover the ball and still ended up under Orakpo for a loss.

Earlier in the game, Orakpo should have had a sack on Charlie Batch. But somehow, Batch was able to slip away just long enough to get rid of the ball and keep Orakpo from the inevitable (i.e. – his first professional sack).

After the game, we did something no opponent has successfully been able to thus far – slow down Orakpo … well, at least long enough to get a couple quotes from him.

Your second preseason game is officially in the book. How you feeling right about now?

“I’m feeling good, man,” he said. “The most important thing was, we got the win. That feels great for the whole team. It was a great team effort we had out there, and I’m feeling great after getting the ‘W.’”

During introduction you seemed to really be just taking it all in. What was that moment like for you?

“Man, it was great,” he said. “Introductions in a huge stadium to Redskins nation … it was just a great feeling for me and I was kind of in the zone, a little bit. It was a good feeling.”

How do you think you did against a pretty talented Pittsburgh team?

“I’ve got to see the tape, but I think I was a lot better,” Orakpo said. “That’s the most important thing – to keep improving. I think I really improved today. I didn’t play as hesitant, and was able to fly around, get on some tackles and just be productive out there. I was able to put some pressure on them, get the quarterback out of the pocket and do whatever I can to help my team.”

From where we were standing, it looked like Dixon fumbled the ball because he was trying to get the hell away from you …

(Laughs). “You know, I’m just trying to be productive out there,” he said. “I just want to keep on getting better. I’m not a guy that’s going to keep on making mistakes. I’m always trying to improve.”

We’re going to come right out and say it – you don’t look like a rookie to us. You look like you’re playing with the confidence of a veteran.

“Yeah, and that’s what the coaches and the players around here see,” Orakpo said. “I guess I’m just that type of guy. I love to work, love to get better and carry that persona with me at all times.”

We were glad to hear that Redskins players and coaches have formed the same opinion of Orakpo in the few short weeks he’s been in town. Taylor Jacobs (a.k.a. – the Justin Tryon of yesterday) taught us never to read too much into preseason performances, but all indications are that Brian Orakpo is a beast.

In all honesty, it wouldn’t surprise us in the least to see him, with all the loads of talent surrounding him on a stacked ‘Skins defense, flourish this year and possibly even take home the NFL’s defensive rookie of the year award.

We know there were a lot of fans out there who wished the Redskins drafted an offensive lineman with the 13th pick this year, but our bet is that Orakpo will quickly silence those folks – sooner rather than later.