thomas and kelly are not snowflakes 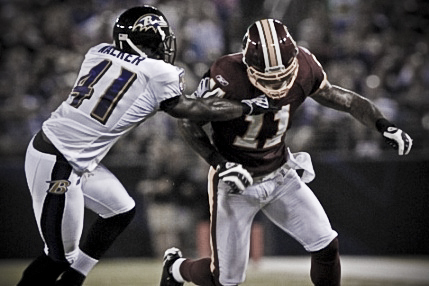 The moment the Washington Redskins front office opted to select three pass catchers in the same round of the same draft, those individuals knew they would be forever linked.

Should one out of the three – wide receivers Devin Thomas and Malcolm Kelly, as well as, tight end Fred Davis – go on to greatness, the story of the other two and their wasted potential won’t be far behind. Should two of them become legitimate contributors at the NFL level, the third player’s name will still be mentioned just as often. Like it or not, that’s a fact.

Honestly, Davis probably has it the easiest of the three, playing a position with more perceived depth than Thomas and Kelly. He can take his time to grow into the role and learn from Pro Bowler Chris Cooley and a blue-collar worker like Todd Yoder. But while Davis is able to avoid the spotlight, the same cannot be said of Thomas and Kelly.

That’s because the ‘Skins have needed a legitimate second option at receiver since Santana Moss came to town back in 2005. And truth be told, the issue was there even before that. When was the last time the Redskins had two wide outs finish a season with at least a thousand yards receiving? Sadly, it was 1999, when Michael Westbrook and Albert Connell each had more than 1,100 yards on the year.

So yeah, this town is more than ready for another breakout performance from a Redskins receiver. We caught up with Thomas and Kelly following the preseason opener. Sure, the team got blown out 23-0. But we were interested in talking with Kelly, who had three catches for 25 yards and Thomas, who started the game and had one catch for 12 yards.

Hey Malcolm, before we get started, we’ve got to talk to you about something. We’ve been telling everyone that whenever we’re at practice, you catch absolutely everything thrown your way. Well, your 13-yard catch against the Ravens, when you had to reach up and pluck a floating Todd Collins pass out of the air, was exactly what we’ve been talking about. So thanks for making us sound like we know what the hell we’re talking about.

(Laughs). “It was just a play where I was coming across and, you know, it’s crazy man, because I like balls like that,” Kelly said. “I know if the ball is down here, we both have a chance for it. I have a chance to catch it and he has a chance to knock it away. When the ball is up in the air like that, I don’t know anyone that’s going to jump up there with me to get the ball. When the ball left his hand and I saw how high it was, I had a smile on my face.”

It’s no secret this team is in desperate need of a big-bodied receiver who can make those tough catches. Are you telling us that’s you?

“Oh yeah, oh yeah,” he said. “That’s exactly what they brought me in for. I’m just trying to do whatever they ask me to do. Actually, I’m trying to do even better than what they ask of me.”

And your health, are the knee problems a thing of the past?

“Aww, man, I’m good,” Kelly said. “I’m great actually. I’m feeling good. The hamstring, I got it stretched out before practice. My knee couldn’t feel any better. I just have to stay on the maintenance program that I’m on, man. It’s keeping me healthy.”

Talk to us about Devin Thomas. What are you seeing from him?

“He’s doing his thing,” he said. “I know people always say that we’re in a competition, but honestly, we’re best friends. That’s what it is, man. We both go out there on the field every day because we both want to be good football players, but it’s not a deal where I want to be good and if he drops a pass, I’m back there clapping because I think I’m one step ahead of him. It’s not like that. If both of us can get out there on the field during games, it’ll be that much better. That’s how we feel.”

You’re a professional, and of course you want to play. But the way we see it, if you both do your job, you’re both going to end up on the field …

“Exactly,” Kelly said. “That’s what people have to realize. You know, the more threats you can have out there on the field at one time, the better for the team.”

From there we went to find Thomas, to see if there was any truth to this best friend talk.

“Yeah, man, we’re definitely best friends,’ Thomas said. “We know the situation at second or third receiver or whatever, but really, we just want to be on the field together. We feel like us out there together, makes this offense a viable threat. If he’s making a play or if I’m making a play, we’re happy for each other. We feed off of each other, so anytime that happens it’s great for both of us.”

If you’re both making plays, then we’re fairly sure the team is going to be smart enough to find ways to use you both, right?

“Exactly,” he said. “Coach Zorn realizes that too, and he really wants that to happen for us. As long as we’re both making plays, we’re going to be getting victories. That’s what he’s definitely looking for.

“Malcolm has natural catching ability, and with him being a tall guy, if the quarterback does throw it a little high, he’s got no problem going up and bringing it down,” Thomas continued. “I’m more the speedy guy. I can get the ball in a short space and make something happen. His combination of stretching the field with his catching ability and me being able to squeeze through holes and get extra yardage, man we’re a duel threat.”

(Laughs). “You’ve got to understand, its football,” he said. “You can’t predict injuries. I’ve never been injury prone or anything like that. It’s just one of those things, you know. We’re definitely not fragile at all. Both of our games involve being physical, so we’re going to try and break tackles and get extra yardage. Hopefully we’ll be able to erase those thoughts.”

Changing the public perception is very easy to do – just go out and perform. Remember Westbrook and Connell? Yeah, the bar is set so low in Washington, that duo was the last to stand out. Thomas and Kelly have looked much improved from this time last year and if they can both stay healthy, then they’ll be well on their way to erasing those negative perceptions hanging over them.