the linebacker and the mohawk 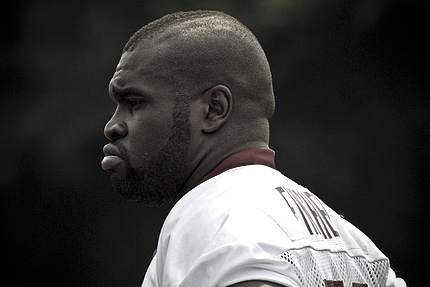 Since his arrival in town, Washington Redskins reserve linebacker Alfred Fincher has been known as a solid, but unspectacular, player who made a name for himself as a dependable special teams guy.

Most casual fans wouldn’t recognize the four-year veteran – even if he walked by them while wearing his jersey. But if Fincher has his way, that will soon change. That’s because the former UConn Husky has followed in the footsteps of Capitals defenseman Mike Green, Chad Ochocinco and half the Wizards by rocking the Mohawk.

There’s just one problem with Fincher’s master plan – he failed to check with his teammates first.

You see, we first noticed Fincher’s new hairstyle last week, and when we broached the topic, he informed us that he’d done it the night before and his teammates had just informed him that there would be a team vote to determine if he’d be allowed to keep his new look.

When we ran into Fincher this past weekend after the scrimmage he still had the Mohawk, so we decided to get to the bottom of things.

Hey Alfred, last time we talked you told us your teammates weren’t on board with the new look and they wanted to put it up to a vote. We see you’re still rocking it, so what happened?

(Laughs). “You’ll have to ask our fearless leader right there,” said Fincher as he gestured towards middle linebacker London Fletcher. “They took a vote on it because the guys were making fun of it a little bit. The vote was – half of them liked it and half of them didn’t believe I did it by myself. But the consensus says, they like it. The bottom line is, I like it, and I’m keeping it.”

So what inspired this new look?

“Nothing man,” he said. “Camp gets routine, so every time camp comes guys keep beards or do something to change it up. I just wanted to change it up a little bit.”

Is this something we’re going to see on you for a while?

“You know what? If I’m feeling it during the season, I just might keep rocking it,” Fincher said. “I’m superstitious a little bit, but we’ll see how it goes.”

After hearing Fincher’s side of the story, we felt obligated to check in with Fletcher.

We were just talking with one of your fellow linebackers about his new hairstyle. What’s your take on it?

(Laughs). “Well, the Mohawk’s not the problem,” said the sage veteran. “It just wasn’t a good one. The barber that he hired wasn’t good. That’s the issue.”

He swears he did it himself …

“It looks like it,” Fletcher said. “Put it this way, if he didn’t do it himself, I’d be disappointed with the way that turned out.”

He admitted the team took a vote on whether it stays or not. How close was it?

“Well, most people thought he could keep it, but that he should be fined,” he said. “A couple guys didn’t want to fine him, but …”

And what’s your take, since you’re a veteran leader on this team?

“Oh, it’s fineable,” Fletcher said, laughing as he walked away.

The moral of the story is simple – sometimes attention ain’t all it’s cracked up to be. You might intend for things to play out one way, but ultimately end up facing a whole new set of consequences. Sure, the Mohawk might get you some notoriety, which is great, so long as you don’t mind donating a few dollars to your teammates.

(Apologies to Dan Steinberg, who has owned the D.C. athlete’s hairstyle beat for years.) 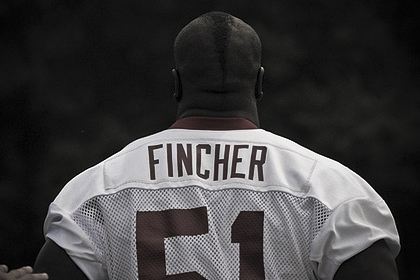