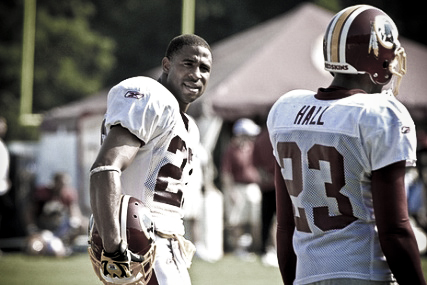 There are few constants in the world of professional sports, but 99 times out of a hundred, if you ask a professional football player about the fans, he’s going to gush and give some variation of “We have the best fans in the world.”

Leave it to Washington Redskins cornerback Fred Smoot to be the one player in the pack to go the other way. But we’ll get to that in a minute.

Hey Freddie, you’ve been in this league a while now. Doesn’t this whole training camp thing get old?

“Hey man, it’s never going to get old,” he said. “I could do this until I’m 40. I’m one of those people that they’re going to have to run away from here. After they cut me, I’m still going to try to come back and do training camp. I feel like I’m always going to have a chance to make the team.”

On these hot and nasty days, when the practice is closed and the fans aren’t around to cheer the team on, how tough is it …

“Actually, as a cornerback, we don’t really like the fans out here,” Smoot said. “They like to ‘Ooooh’ and ‘Aaaah’ about every little catch a receiver makes, so we’d rather be out here where only the camera can tell the story.”

How about this, we’ll give you the chance right now to tell the story of training camp. What’s really going on?

“I’ve been doing really well,” Smoot said. “I started camp feeling a little sick, but I’ve caught back up and I’m feeling real good now. The defense, we’re dominating like we always do this part of camp, but that’s how it is. The offense, it takes them a little while to get into their rhythm. But, all in all, I’m very happy. We’ve got a lot of beef up front, and it makes me feel good all the time.”

There’s a lot of new faces on this defense, how good are you guys going to be this year?

“The sky’s the limit,” he said. “I can’t say how good we’re going to be. All I can say is that we’ve got potential. If we can fulfill that potential, then maybe we can accomplish something.”

We wanted to check in with you and ask about Justin Tryon and Kevin Barnes. What have the young kids shown you so far?

“We’ve got a very young group of defensive backs, and in that group we’ve got a lot of playing experience, as far as me, DeAngelo [Hall], Carlos [Rogers] and a couple more guys,” Smoot said. “But our young guys have come out here actually and they’ve been playing real well. They’re soaking up the technique, and that’s what you’re looking for – to see how fast they learn the technique that the coaches want them to do and the techniques of the defense, and they’re that doing very well right now.”

So what you’re saying is that the team might even have more depth at cornerback than folks realize?

“You know, we’ve got a lot more depth than people realize, but we want to stay right there under the radar where we at,” he said. “We don’t want nobody to throw out expectations, we’re just gonna go out and take it one game at a time.”

And how’s life treating you off the field?

“You know, I’m an off-the-field genius,” Smoot said. “I’m just trying to work on a couple different things, you know. I think I’m fittin’ to try to find out what courses I’m gonna have to take to be a G.M. when I retire from football. Maybe a little bit of accounting or something else, I don’t really know about that, but I think that’s what I want my next job to be. I want to be a G.M. of a major franchise.”

Okay, we’ll play along. What would be your strengths as a general manager?

“Considering my knowledge of football is impeccable as far as me knowing talent, as far as me loving watching the college game, knowing athletes – my best thing would be putting teams together,” Smoot said. “Like, I understand the aspect of you could put 53 all-stars together and still lose, but I know if you put 53 guys together and they care for each other and work as a team, you gonna win every time. I think that’s what the NFL is starting to show each and every year because New England and the Pittsburgh Steelers play as a team. Teams win championships, individuals sell tickets.”

Are you talking from past experience?

By the time Smoot was done talking, we were half convinced he’d be a better general manager than at least a third of the guys currently holding the job.

But before we rushed to start an internet campaign of “Smoot for G.M.,” we wanted to get a second opinion. Naturally, we turned to center Casey Rabach, who we consider the voice of reason on matters such as this.

Hey Casey, Smoot says when he hangs up his cleats he’ll make a great general manager. What say you?

We assured him we had.

If nothing else, his team would have great morale …

“Oh yeah, I guess the team that parties together, plays together,” Rabach said. “I’ve heard that saying before. But I’ve never actually acted that one out.”

So you’re saying it might not be a good idea for a team to take a chance on Fred Smoot as their general manager?

So, to recap: fans are bad. Smoot is good. Smoot could play until he’s 40, but he’s already envisioning himself as a top-tier general manager because of his impeccable football knowledge and everyone (except maybe Casey Rabach) should clearly embrace the idea of a team giving him the keys to the franchise. Seriously, if Matt Millen could do the job, anyone can, right?