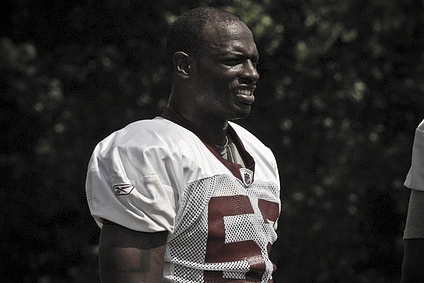 For whatever reason, Rocky McIntosh simply isn’t a fan of the media.

While a majority of the players that come out of the University of Miami never met a camera they didn’t like, McIntosh is simply wired differently.

Now, a decade or so ago that would have been an issue. Without the media able to get anything out of him, McIntosh simply would have become a forgotten name on a roster full of otherwise entertaining characters.

But luckily for ‘Skins fans, we live in the world of new media, which means we get to see little glimpses of Rocky’s hidden personality.

That’s how we learned he loves paintball. And roller coasters. And professional wrestling. We can even track the linebacker via his Twitter account.

With all of this in mind, we set a goal to try and get to know McIntosh a little better in hopes of showing fellow fans just how fascinating this guy really is.

Hey Rocky, we’re not going to lie – we’re expecting big things from you this year. How did you spend your offseason?

“Just working and resting,” he said. “That’s a big key, to recuperate, train a little bit and tune up for the season.”

For our money, you’re one of the most intriguing guys on the roster. Fans don’t know much about you, but little moments of your personality sneak out every once in a while. Like last week, for example, when you showed up on WWE’s Monday Night Raw at the Verizon Center. What was that experience like?

“Oh man, that’s probably the most exciting thing I did this summer,” McIntosh said. “Just being out there with those guys – they put on a great show. We got to meet a lot of the [WWE] guys back stage after the show … a little perk of being a Redskin. It was pretty cool, man.”

If we’re not mistaken you’re a pretty big wrestling fan from way back, right?

“Oh yeah, oh yeah,” McIntosh said. “Definitely. When I was little I caught a couple matches and hadn’t seen it live since then, so it was definitely breath taking to see it again.”

Who was your favorite wrestler back in the day?

“Actually, I got to meet Arn Anderson,” he said. “He’s a pretty good dude, and I was kind of star struck with that one. It was cool, man.”

More than a few professional athletes end up in the wrestling ring. Is that something you could ever see yourself doing?

(Laughs). “Probably … after football,” McIntosh said. “Nah, I’ll be good. But it’s definitely exciting and hey, they make a lot of money doing it.”

Think about it, man. Guys like Lawrence Taylor and William “The Refrigerator” Perry jumped in the ring. We think you could hold your own in there …

“I wouldn’t mind making a special appearance,” he said. “I’ll tell you that.”

Would you be able to put on a better show than Shaq did the night you were there?

“Nah, man, he put on a good show,” McIntosh said. “He put on a really good show. He’s definitely comedic and knows how to play a role.”

Quick sidenote: McIntosh was sitting ringside with Jason Campbell, Mike Sellers and Stephon Heyer during the Raw broadcast. We caught up with Campbell to see what brought him out to the live event and he said he ended up going to Raw because he wanted to take a young kid and his father to the show, but that he definitely enjoyed it. When asked if he could do what Shaq did – namely go toe-to-toe with a professional wrestler like the Big Show – without hesitation he said, “I’d probably have to go against someone smaller … or bring Big Mike [Sellers] with me.”

So for everyone worrying about protection problems this season, Campbell’s at least got that going for him … which is nice.

Anyways, back to McIntosh.

Rocky, you’re a veteran and you’ve been to a few camps by now. What do you try to get out of this stuff?

“I’m just tuning up,” he said. “Each and every week is a tune-up and we’ve got four preseason games, so you just want to keep building and building. Nothing’s going to be perfect, but you’ve just got to make sure you’ve got perfect practices out here.”

Does it make it better for you when the fans are out here cheering you on?

“Definitely,” McIntosh said. “We’re here for them, man. We want to make them proud of us and hopefully convert some these guys around here that are Cowboys fans or Philly fans. We’ve just got to keep all of this Maryland, D.C. and Virginia area all Redskins.”

If McIntosh keeps talking like that, there’s little doubt that he’s quickly going to become one of the more beloved members of this ‘Skins team – with or without the media.