addressing the elephant in the room 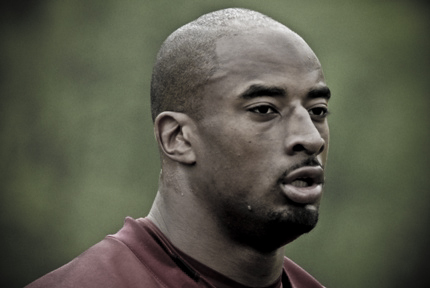 When the Washington Redskins took the field Saturday morning for the third day of training camp, one thing was crystal clear – the defensive line was leaps and bounds ahead of their offensive counterparts.

Not sure of the answer, we asked veteran defensive end Andre Carter for some clarity.

“Nah man,” Carter said, refusing to get excited over the third day of camp. “They got the best of us early and we had the best of them later. This was the first day with pads on, man.”

We know you’re a humble man and you won’t say it, so we’ll say it for you – you guys on the defensive line were running circles around them. You, my friend, look like the Andre Carter we remember – a speed rusher blowing by guys. Albert Haynesworth was wreaking havoc in the middle and Brian Orakpo was embarrassing people. Seriously, you look like the real deal.

(Laughs). “It’s a process, and I’m going to be honest,” Carter said. “In the red zone we weren’t at our best. But our competitive nature toward each other is great because it builds character and it builds unity as a team. It’s a long process and if what you said is true, we’ve got to apply that on game day.”

What expectations do you have for yourself and for the defensive front four in general?

“You know, this is year nine and I’m just trying to make a legacy for myself,” he said. “They always say when you’re still around at this time, you’re at the end of your career. Whether it be 12, 13 or however many years … who knows? I’m leaving that to the big man upstairs. But this is where I really turn it on and play my heart out. This is a whole ‘nother level. I just need to say ‘This is Andre Carter, and this is who I am,” and then go out and make some plays.”

You said you’ve been doing this for a decade now …

Fine, you’ve been around for nearly a decade. Either way, it’s a miserable day to be out here in the heat, running around in pads. We know you’re a professional and all that, but there are a hundred other places we’d rather be than on that field baking in the sun with all those pads on.

(Laughs). “You know, it can go either way,” he said. “What you put in is what you’re going to get out of it, man. Nothing in life is easy. These are the dog days and everything you put in helps towards the rewards later. That’s how I look at it.”

So what can we expect from you this year?

“I’m gonna lay it all on the line,’ Carter said. “As you get older, you look at a lot of film. And when you play every down, towards the end of the fourth quarter, I noticed I was completely worn out. I think this year, and for as long as I play, I’m going to get into a good rotation so that when the fourth quarter comes, I still have a little bit left.”

You wanna put it out there too?

We’re just saying, with Haynesworth tearing it up in the middle and you flying by people, with more speed than we remember …

“I appreciate it,” Carter said. “That’s all I’ve been working on. I mean, I did my lifting and stuff, but I wanted to get faster this year. People say I look leaner and I ran a lot, but …”

Seriously, how much leaner could you possibly be? You’re already down to three percent body fat and making the rest of us look bad.

(Laughs). “No, It was just a great offseason,” he said. “I worked with the guy I worked with when I was coming into the league – back when I was getting ready for the combine and stuff. I did a lot of martial arts stuff to get my endurance and footwork right, and I feel like it paid off.”

Random fact: Phillip Daniels is the godfather for Carter’s son.

We share this to illustrate just how tight this defensive line truly is. They’re not just co-workers. They all legitimately care about each other and want to see each other succeed. They push each other to be better and now that they are deeper than any Redskins’ defensive line in recent history, we can envision great things from them.

Like Carter, we refuse to get too excited over the third day of training camp, but if they’re rolling like this come week one in New York … all bets are off. As for the offensive line, we’ll worry about them another day.