training camp: what to watch 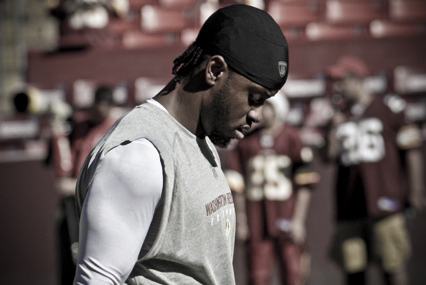 With training camp less than a week away, we decided now is the perfect time to spotlight the five biggest focal points for the 2009 Washington Redskins. Whether the ‘Skins are able to return to the playoffs for the first time since Joe Gibbs retired (again) or the team is left standing on the sidelines while the NFL postseason rolls around (again) will hinge largely on these five positions.

1. Offensive line – Everyone knows about the right tackle situation. Jon Jansen, for the first time in his professional career, will earn a paycheck from a team other than Washington (he was cut this offseason and is now a member of the Detroit Lions). Stephon Heyer, who has never shown he’s anything more than a serviceable backup, is currently listed as the starter.

The rest of the pack? Mike Williams, the former first rounder whose fall from grace included ballooning to well over 400 lbs. and living on Derrick Dockery’s couch, and Jeremy “Not Jeff” Bridges, who was previously with the Panthers, head into camp the two players most likely to challenge Heyer.

And while it’s easy to see why folks are focused on the uncertainty at right tackle, we’d like to bring up the right guard position. Yes, Randy Thomas is your starter. And yes, when he’s healthy he’s solid. But that’s the problem. At 33, Thomas isn’t getting any younger and/or healthier. And the only depth behind himis Chad Rinehart, who has taken longer to develop than anticipated and someone named Will Montgomery, who even the coaching staff couldn’t identify in a police lineup.

So basically, the best-case scenario is someone from the Heyer/Williams/Bridges trio steps up and entrenches themselves as a bona fide starter at tackle and Thomas is able to stay healthy for 16 games and remains dependable.

But what happens if things play out the other way – no one can lock down right tackle and Thomas gets injured yet again?

2. Linebacker – No one can question the heart or production of middle linebacker London Fletcher, who rose from the unheralded John Carroll College to play 12 seasons in the NFL. Next to Fletcher is Rocky McIntosh, a former second rounder from “The U,” and Brian Orakpo, quite possibly the biggest named defensive player selected in this year’s NFL Draft. On paper, this linebacking corps is solid. But please allow us to play devil’s advocate for a moment.

Fletcher is a 34-year-old who, thanks to injuries last season, looked human for the first time in his impressive career. McIntosh, even though he’s only 26, has the knees of a senior citizen and Orakpo made that big name for himself as a pass-rushing defensive end. Not at linebacker.

A year ago, guys like Marcus Washington, Khary Campbell and H.B. Blades were also in the rotation for playing time, giving plenty of depth in the middle of the defense. With Washington and Campbell no longer with the team, we’re left with Blades and a bunch of uncertainty coming off the bench this season. If someone like Alfred Fincher, Chris Wilson or Robert Thomas can step up, then great. If not, things could get ugly on an otherwise stout defense.

3. Wide receiver – Santana Moss cannot be questioned. Everyone else can.

Once the ‘Skins get through training camp and finalize their 53-man roster, it’s a safe bet that they’ll have just five wide outs left standing. That group will be Moss, Antwaan Randle El, Devin Thomas, Malcolm Kelly and a player to be named later.

Randle El is, at best, a third receiver. Unfortunately, he’s been cast as a number two during his time in Washington, which is why the only fans who speak fondly of him reside in Pittsburgh. And while we’re grateful that James Thrash is finally gone, it’s not even a lock that any of the remaining receivers will match his “production.”

Thomas and Kelly have done nothing but take heat since they came to D.C. They’ve heard the criticism and devoted their offseasons to ensuring their sophomore seasons go better than their rookie year. If one, or both, can make the leap and haul in something like 40-50 catches this season, all will be forgiven. If not, those questioning management’s drafting abilities will only get louder.

The rest of the pack at WR consists of “Daredevil” Keith Eloi, Roydell Williams, Trent Sheldon, Marko Mitchell and Marques Hagans. Eloi is great when it comes to jumping out of pools or onto truck beds, but we have no clue whether he can actually play receiver. Williams posted solid numbers – 55 receptions for 719 yards and four touchdowns – with Tennessee in 2007, but hasn’t been healthy since. And the rest of the pack? Well, your guess is as good as any.

Bottom line – someone other than Moss needs to step up this year at receiver. Otherwise, teams are once again going to take away Santana deep on first and second down and double team Cooley on third downs and in the red zone, ensuring the ‘Skins offense hovers around 15 points per game. Again.

4. Cornerback – The worst thing that could happen to the Redskins secondary is a prolonged injury to DeAngelo Hall. While it’s odd to think a guy who has been in the burgundy and gold for only half a season is that vital to the team’s success, it’s the sobering truth. Because after him you’ve got Carlos Rogers, Fred Smoot and … well, that’s it.

Kevin Barnes, the hard hitter out of Maryland, is a rookie and will need time to grow. If you don’t believe us, look at Justin Tryon, who looked thoroughly lost last season during his inaugural campaign. There are some folks at Redskins Park who swear Tryon is the real deal and will make the leap this year. We’ll go ahead and take the “wait and see” approach.

When Rogers is on, he’s a true lockdown corner. Unfortunately, he’s also the guy who some believe quit on his teammates when times got tough during the team’s second-half slide. He’s heading into the final year of his rookie contract, so we know he’ll be motivated. But it’s tough to say with any conviction that Carlos is definitively in the team’s long-term plans. And while we love Smoot, there are some who think he might not even survive cuts this season.

5. Quarterback – You know the story by now.

This past offseason management tried to bring in other glitzier names to run the show. Begrudgingly, they’re stuck with Campbell. It goes without saying that this is a “make or break” year for Campbell (and also for Jim Zorn, whose coaching career is ultimately tied to his quarterback). If Campbell goes out and plays well, he gets paid and everything else is forgotten. If not, Campbell and Zorn will likely be elsewhere this time next year.

It’s also worth noting that a large chunk of the fanbase will be paying ample attention to the backup quarterback situation. In one corner we have Todd Collins, a tasty drink … er … veteran signal caller who is never flashy, but is typically effective. In the other, we have Colt Brennan, the pride and joy of Hawaii and underdogs worldwide. If Campbell falters, it’ll be very interesting to see which player the team turns to.

Of course, if Campbell falters, this season could very well get ugly in a hurry.

That’s all for now. Feel free to leave a comment or share your opinion with the class.