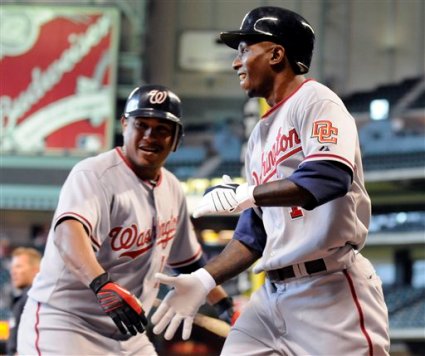 Even by baseball standards this one was ridiculously long.

On May 5th the Houston Astros (11-15) and the Washington Nationals (7-17) squared off at Nationals Park in a battle of mediocre baseball teams. The Nats won the game 11-10 in 11 innings. Last night. In Houston. No, seriously.

More than two months after starting pitcher Scott Olsen threw the first pitch to Houston outfielder Michael Bourn on a festive Tuesday in Washington D.C., the Nationals picked up a victory more than 1,400 miles away. This is where witty bloggers insert a joke about the lengths these doormat Nats go to in order to pick up a much-needed win.

Put it this way – Olsen, the 25-year-old lefty who started the game and went five innings, went on the disabled list May 19. He then spent more than a month on the shelf getting healthy and returned to the lineup June 29.

Washington relief pitcher Joel Hanrahan earned the win after pitching in the top of the 11th inning for the Nationals – allowing three hits and striking out one batter while throwing 16 pitches. When the game finally ended and Hanrahan had earned his first win of the season he was actually enjoying the night off … in Pennsylvania. You see, Hanrahan was traded to the Pittsburgh Pirates, along with outfielder Lastings Milledge, for Nyjer Morgan and Sean Burnett, July 1.

Speaking of Morgan, he scored the winning run for Washington last night after a throwing error by shortstop Miguel Tejada on a routine throw to first base. Morgan was technically a pinch runner for outfielder Elijah Dukes, who went two for four with a homer and two RBIs in the win, but had been demoted to the minor leagues by the time the game officially ended.

All of this because of an epic rain delay. But you know what? We’ll take it. Mostly because, anyone who has seen these Nats play their uninspired brand of baseball of late knows that this team hasn’t been on the winning side of an interesting baseball game in quite some time. Some might say it’s been two months.

Does anyone have a Corona?