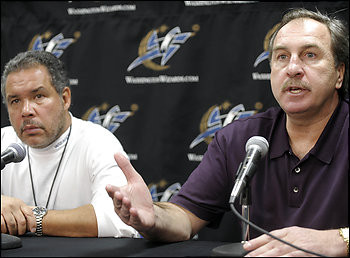 If you learn nothing else about Washington Wizards general manager Ernie Grunfeld, know this – if he has the fifth pick in the draft, he’s going to trade it.

Five seasons ago the Wiz shipped the fifth pick in the draft, which ended up being point guard Devin Harris, to the Dallas Mavericks along with guard Jerry Stackhouse and forward Christian Laettner for forward Antawn Jamison. Since then, Jamison has been the captain of the Wizards and a great locker room guy for a young and sometimes immature squad. Paired with Caron Butler and Gilbert Arenas, Jamison has guided a normally irrelevant Wizards team to the postseason four out of his five seasons in town. And on a personal note, he’s averaged at least 19 points a game and 7.6 rebounds per season since he came to D.C. All of this shows why Washington refused to move Jamison last year at the trading deadline.

Well, here’s hoping that Big Ern walks away from this one smiling too.

Reports last night indicated that Grunfeld did it again, trading the fifth pick to the Minnesota TimberWolves along with forward Oleksiy Pecherov, forward Darius Songaila and the expiring contract of center Etan Thomas for guard Randy Foye and forward Mike Miller.

Those same beat writers say that the team was convinced none of those players would be good enough to start immediately, which is why Grunfeld (who is in “win now” mode) was so willing to move this pick.

Let’s take a look at what the Wizards were able to move – you’ve gotten rid of Thomas (who was due to make $7.35 million this year), who was once a serviceable player, but has been largely inactive over the last two seasons due to health reasons. And nothing against Pecherov ($1.6 million) or Songaila ($4.5 million), but let’s be honest – neither has even been mistaken for an integral part of Washington’s championship aspirations. Most folks in town couldn’t even tell you what number they wore.

Coming to town we have an excellent outside shooter in Miller, who will earn $9.75 in the final year of his current contract and an young guard capable of scoring in bunches in Foye, who will take home $3.6 million. Quick math shows the difference in what the Wizards traded away in salary for this season versus what they got back is nominal (roughly $100,000), but the fifth pick in the draft is due to receive $2.7 million and that would have pushed the team into luxury tax territory for being over the salary cap.

Besides the monetary aspect of this deal, there’s the fact that the Wiz just acquired two talented players.

Miller can flat out shoot. On a team of streaky jump shooters, he is finally someone the Wiz can count on to consistently knock down big three pointers when the game is in the balance. He’s a 40 percent three-point shooter, has won rookie of the year (2000-01) and the sixth man of the year (2005-06) honors over the span of his nine-year career. And best of all, he’ll contribute more next season than the Thomas/Pecherov/Songaila combo would have … by himself.

And that’s before we even factor in Foye, the 25-year-old who was one of the only reasons to tune into T’Wolves games last season. For those not familiar, he’s a former Big East player of the year, NCAA all-American, and NBA all-rookie first teamer. He’s 6-4, and is strong and athletic. Oh, and he scored more than 16 points per game last year.

Without looking at the roster and just factoring in who is leaving town and who is coming in, this is a great deal. The bigger issue is the overabundance of guards on the roster and a complete lack of big men other than Brendan Haywood and JaVale McGee. You can try to argue that Andray Blatche should be on that list, but let’s be real – he’s bringing nothing but disappointment to the table.

Conversely, here’s the breakdown of players currently on the roster who can line up at guard: Arenas, Javaris Crittendon, Foye, Miller, DeShawn Stevenson, Nick Young and the expiring contract of Mike James. That’s seven names for two positions. Clearly Grunfeld has more work to be done, which would address our other chief question – why now?

Why would the Wiz pull the trigger on a deal two days before the draft when there’s a chance Minnesota or another team could sweeten the pot once we get closer to the draft? The best reason we can figure would be that this is step one and the sooner Ernie finalizes this deal, the sooner he can move forward.

While we would have loved to see Curry come to Washington, we can’t argue Grunfeld’s track record. Since he came to town he’s turned a doormat into a team that, when healthy, is competitive and entertaining.

His biggest mistake during his time here as a general manager was matching the contract offer the Milwaukee Bucks threw at Thomas, but he’s now righted that wrong. We’re not comfortable giving $111 million to Arenas, who we often refer to as a one-legged, me-first point guard, but again, Grunfeld has earned the right to take that gamble.

It’ll be interesting to see where the team goes from here, and if nothing else, the Wizards continue to evolve into a highly-entertaining squad that can trade buckets with the best of them.