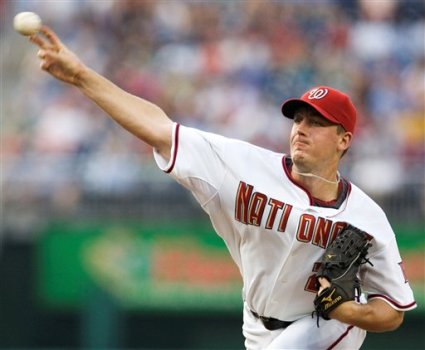 Don’t look now, but the Washington Nationals are officially hot.

After winning exactly two out of their first 21 series, the Nats have now won their last two – taking two of three games from the New York Yankees and the Toronto Blue Jays.

Coming off the heels of a four-game losing streak (three straight to Tampa Bay and the series opener versus the Yankees) the Nats somehow righted the ship against the AL East, the best division in baseball, and won four straight (before yesterday’s 9-4 loss). For a team still on pace to lose 114 games this season, that’s impressive.

Here’s a quick recap showing just how solid Washington’s starting rotation has been over the last week:

Last Tuesday in the series opener against the Yankees, pitcher Shairon Martis gave up just one earned run over six innings. Sure, the Nats eventually lost the game 5-3, but Martis lasted long enough to throw 106 pitches in an attempt to keep the always shaky bullpen out of the equation.

Starting pitcher John Lannan was great the following night, allowing two runs and four hits in 8 1/3 innings, as the Nats snapped their four-game losing streak and “stole” a victory from the mighty Yankees 3-2.

After a five-and-a-half-hour rain delay Thursday, starting pitcher Craig Stammen earned the first win of his young career, shutting out New York over 6 1/3 innings in a 3-0 win and giving the New York newspaper plenty to write about.

Friday’s game was another epic battle, with starting pitcher Jordan Zimmermann giving up one earned run over 5 2/3 innings as the Nats took game one from Toronto 2-1 in 11 innings. Zimmermann might have gotten a no decision, but it wasn’t because of anything he did.

Saturday’s match-up featured more of the same, as the Nats and Blue Jays needed extra innings once again to decide a winner. Ross Detwiler, in just his seventh career start, gave up two runs over seven innings in a 5-3 win that finally ended with a Willie Harris walk-off home run in the 12th inning.

That’s six earned runs allowed by five starting pitchers over the span of 33 2/3 innings (good enough for a sparkling 1.60 earned run average). For a rotation full of youth and inexperience, those are numbers that bring tears of joy in an otherwise dismal season. Sure, things went south yesterday as Martis got roughed up in the first inning and the Nationals lost 9-4, but we’re here to accentuate the positives.

There’s little reason to believe the Nats can sustain this momentum against the defending champion Boston Red Sox, but hey – folks didn’t give Washington much of a chance against the Yankees this time last week and we saw how that turned out.

Chances are the Red Sox will continue to win games while the home team reverts back to mediocrity, but maybe the Nats catch another giant off guard. Crazier things have happened, right?