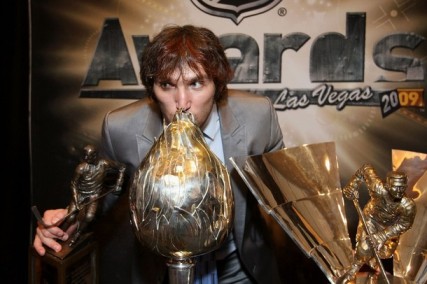 Alex Ovechkin is easily the NHL’s most exciting star, and at this rate, he’ll soon be the league’s most decorated as well.

At just 23, here’s all the hardware the Washington Capitals wing has earned since he came into the league back in 2005-06:

Last season Ovechkin became the first player ever to win the Hart, Pearson, Richard and Art Ross Trophies in the same season. And while he was more than happy to add another Hart, Pearson and Richard Trophy to his resume last night, Ovechkin made it clear he’s still hungry for more.

“I want to be in the same situation as Pittsburgh was,” he said. “Personal stats is good, personal awards is good. I just want to win one award – and that’s the Stanley Cup.”