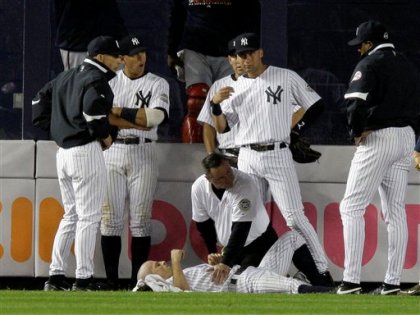 Back in the day, you’d hear someone say something outlandish like, “I don’t care if the Redskins lose every other game, just as long as they beat those damned Dallas Cowboys” and you’d wonder if that person actually meant it.

Would this individual really be okay with a 2-14 season as long as Washington’s two victories came at the expense of their biggest rival? Or were they simply saying that if that year’s ‘Skins only won twice, please let both wins be against Dallas?

Whatever the case, we couldn’t help but think of this demented rationalization after the Washington Nationals managed to win two out of three games against the mighty Yankees in New York this week. Last night’s 3-0 win at Yankee Stadium improved the Nats’ record to 18-46 and gave them back-to-back wins for the first time since early May.

To recap, we have one of the league’s elite franchises, those Damned Yankees, with their $200-million payroll lining up against a Washington team so bad that they’re nine and a half games behind Arizona … for 29th place.

Coming into the series the Nationals were just 6-23 on the road this season, and yet, were the better team for much of the three-game series.

In game one, the Yankees needed a late-inning rally to a steal victory from the Nats. Down 3-2 heading into the seventh inning, New York scored two runs in the seventh and one in the eighth to get CC Sabathia his sixth win of the season.

Wednesday night, the Nats were led by New York native John Lannan, who pitched into the ninth inning (preventing the Nationals’ shaky bullpen the opportunity to blow the game). Lannan gave up solo homers to Robinson Cano and Johnny Damon, but was otherwise stellar in his first outing back home in New York. How improbable was this win? Prior to this game, New York had been 23-0 when holding their opponent to three runs or less this season.

Last night was more of the same – Washington got off to an early start (well, after that whole five-hour rain delay) and thanks to a strong outing by a Nationals starting pitcher (this time it was rookie Craig Stammen, who picked up his first career win) the Yankees are now left to face the brutal New York media after their most embarrassing series of the season.

Since the Nationals entered the series with a .262 winning percentage, they are officially the worst team to beat the Yankees in a series in which the Yankees were at home. Ever.

Conversely, the Nationals won just their third series of the year and leave New York finally celebrating their first shutout of the 2009 season. Good times.