second chance at a first impression 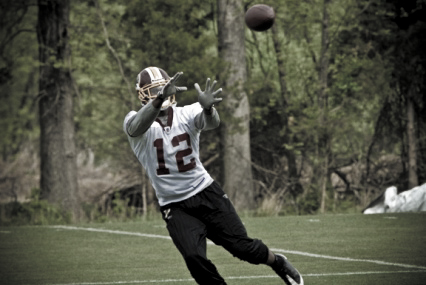 We understand that very few Washington Redskins fans have had the chance to get to know him or see him in action, but let us be clear — it’s impossible not to pull for Malcolm Kelly.

During his inaugural NFL training camp, the Oklahoma receiver caught anything and everything thrown his way. If he dropped a ball, it happened on a day we weren’t around. Unfortunately for Kelly, he simply couldn’t stay healthy last year and finished the season with just three catches for 18 yards in the five games he played in.

A year later, Kelly seemed to be set for the same fate as he was left on the sidelines during minicamp because of knee issues once again. The good new is, Kelly has seemingly fully recovered from microfracture surgery this past February and has been a regular contributor during the team’s organized team activities. We caught up with Kelly on the final day of OTAs to see how he’s feeling these days.

“I feel great, but then again, I felt great this time last year too,” he said.

We also were curious to see how he feels to see so many people rush to judgment and label him (along with fellow second rounders wide out Devin Thomas and tight end Fred Davis) as a bust after just one year.

“I was talking with Santana and he told me the same thing happened to him his rookie year,” said the 22-year-old Kelly. “He got hurt, barely played at all his first year in New York and everyone said he was a bust after one season.”

Kelly was right, Moss played in just five games and had just two catches for 40 yards his rookie season back in 2001. As we all know, Moss went on to do quite well for himself, earning a trip to the Pro Bowl as he set the Redskins single season receiving record back in 2005.

Even though Kelly and Moss are obviously receivers from completely different molds (at 6-4 and 227 lbs. Kelly has the big body the ‘Skins sorely lack at wide out, while the speedy Moss, who is generously listed at 5-10 and 200 lbs., is more of a home-run threat) it’s wise for Kelly to learn as much as he can from an established veteran such as Moss.

When we specifically mentioned that the Redskins have lacked a receiver capable of consistently running a fade route Kelly smiled and said, “That’s what they brought me here to do.”

He went on to say that he feels very comfortable working with quarterback Jason Campbell and that he’s excited to see what the duo is capable of producing this season. He plans to take a week to go back home and visit family, but otherwise will spend the next month continuing to work on his conditioning so that once training camp rolls around he can hit the ground running.

With the ‘Skins in dire need of a number-two receiver to complement Moss, you really have no choice but to hope either Kelly or Thomas can step up and grow into the role. Thomas is viewed as more of a raw talent, while Kelly definitely looks the part of a legitimate NFL wide out. Unfortunately his body has done him no favors thus far and he’s spent as much time on the sidelines as we have.

The good new is, should Kelly be able to stay healthy, there’s little reason to doubt he can become the receiver the front office thought he was when they used a second rounder on him a year ago. We fully expect that once Kelly makes his way onto the field, he’ll be there for the foreseeable future. And if that happens, there will be even more reason for Kelly to free style.