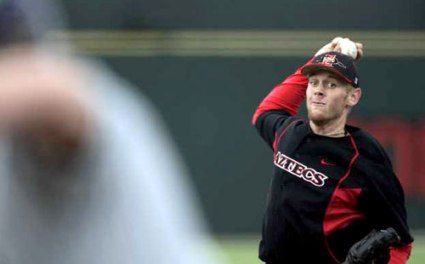 At 6 p.m. tonight, Major League Baseball’s amateur draft will begin. And once the draft is officially underway, the Washington Nationals will use the first overall pick on San Diego State pitcher Stephen Strasburg, the highly-touted 20-year-old who instantly gives hope to the entire fanbase.

Regardless of what outrageous signing bonus demands agent/antichrist Scott Boras makes, Strasburg will be the top pick and will be selected by the Nats. Anything else and Major League Baseball should retract the Washington franchise on the spot.

But here’s where things get interesting – the Nationals also hold the 10th overall pick after failing to sign last year’s first rounder, Missouri pitcher Aaron Crow. For those in need of a refresher, the Nats refused to meet Crow’s demand of a $4.4 million signing bonus a year ago, so he’s back in the draft pool and Washington gets to try again with a second high-draft pick.

Let us say this up front: we’ve been called a lot of things over the years, but a baseball scout is not one of them. That being said, if given the chance here’s what we would do if we were acting general manager Mike Rizzo when the Nationals are on the clock with the 10th pick – draft Crow again.

Sure, there’s a good chance he won’t be around when the Nats are back on the clock at 10, but in the event he’s still on the board, take him again. Crow is easily one of the top talents available in the draft. That’s never been in question. The issue was agreeing on a signing bonus (the Nats offered $3.5 million).

But there are two reasons why this can work – Jim Bowden is gone. Everyone else who still remains employed by the organization can simply blame it on him (for better or worse, everyone else around town does). And here’s why you take a second chance on drafting Crow – you’ll have all of the leverage.

Are you telling us he’d hold out again? The kid already sat out a year during one of the most important phases of his young and promising career. There’s zero chance he can afford to sit out another season. Unlike the Strasburg situation where the rookie is in the driver’s seat knowing a.) he’s talented and b.) most of the rest of the roster is not, Crow will have to sign quick and get back into the daily grind sooner rather than later. This is a game of chicken the Nats can actually win.

Chances are Crow will be already be off the board by the time the Nats are ready to select their second first-rounder, but should the unexpected happen and the Missouri righty is still be on the board, the Nationals would be wise to give him a second chance to make a first impression.