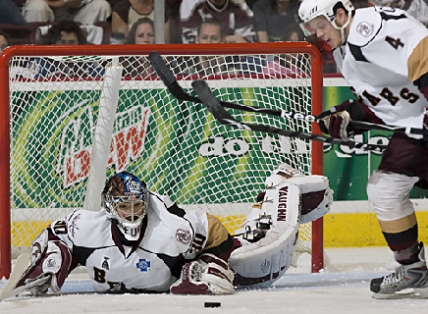 Although most of the Washington Capitals roster is in vacation mode, enjoying time off after another impressive season, we’re pleased to report that the future of the Caps organization is alive and well.

With the local sports scene currently in the slowest portion of the calendar year, we loaded up the car for a road trip to Hershey, Pennsylvania, to see the Bears (Washington’s AHL affiliate) take on the Manitoba Moose in game three of the Calder Cup finals Saturday.

Some may think of minor-league hockey as a gimmick-riddled event in front of a sparse crowd in some podunk town. However, once we arrived at the Giant Center, we immediately knew that wasn’t the case. The game was a sell out (10,696) and everyone in attendance was fired up as the Bears tried to bring home their 10th championship in their proud history.

And from the very first moment the puck dropped these two teams, who were the top two franchises during the AHL’s regular season, were playing for keeps. This was a very physical back-and-forth game featuring a Bears team led by forward Alexandre Giroux, who became just the fifth player in league history to score 60 goals in a season.

On the other side of the rink you had the Moose, who thanks to goalie Cory Schneider, allowed the fewest goals in the league this season. The top offense versus the stingiest defense. You couldn’t ask for a better setup. And here’s the kicker – the game lived up to the hype.

Neither team scored a regular-strength goal. Both teams threw their bodies around with reckless abandon. You quickly got the sense that whichever team struck first could very well steal the game. Fortunately for the home team, the Bears got on the board first.

Just eight seconds into a powerplay in the first period, Bears forward Graham Mink deflected defenseman Staffan Kronwall’s blast past Schneider to give Hershey the early 1-0 lead at 6:22. Another powerplay, another goal for the high-powered Bears. This time, it was Giroux who found the back of the net, when he fired a one-timer over the shoulder of Schneider halfway through the second period to push the Bears lead to 2-0. Giroux now has a record 74 goals this season, counting the regular and post season.

(One sidenote: the Bears were awarded this powerplay after Moose defenseman Zack FitzGerald was called for roughing. Nothing out of the ordinary, right? Um … wrong. FitzGerald was actually sitting on the bench when he decided to grab a Bears player from behind in hopes of preventing him from getting to the puck. That takes talent.)

The Bears added an empty-net goal by forward Quintin “No Spleen Needed” Laing in the final minute to seal the victory and take a two-games-to-one lead in this best of seven series. While we spotlighted the offense, we would be remiss if we didn’t highlight the job in net by Bears goaltender Michal Neuvirth, who looked sharp turning away all 28 Moose shots.

At no time did Neuvirth and the Bears defense look better than when they successfully killed off a 50-second five-on-three penalty situation when the game was still very much up for grabs. With Giroux and forward Chris Bourque in the penalty box, the Bears buckled down and were able to preserve the shutout (even though the majority of the powerplay was spent in their zone and with the same three penalty killers stuck on the ice).

The three stars on this night were Giroux (one goal), Kronwall (two assists) and Neuvirth (fourth shutout of the postseason), but this was a total team effort. While there is plenty of hockey left to be played before someone takes home the Calder Cup, the Bears have to feel good about their chances should they continue to play at this level. They were aggressive on both ends of the rink. They weren’t afraid to get physical, whether by sending a message with a crushing check along the boards or setting up camp in front of the Manitoba net.

And most importantly, they’re loaded with talent. We didn’t even mention guys like defenseman Karl Alzner, who returned from a monthlong absence due to a concussion, or defenseman John Carlson, who at 19 is already one of the players George McPhee and friends are dreaming of having on the NHL roster. Everyone in D.C. is already prepared for the Simeon Varlamov era after his strong postseason run, but if Neuvirth continues to be this rock solid in net, he’s going to present the team with a wonderful problem (namely, which goaltender not named Jose Theodore should they anoint their long-term answer in net).

If you’re on the fence about whether or not to make the trip to Hershey during this championship run, just do it. Besides the fact that many of these guys will be fixtures on the Capitals roster for years to come, head coach Bob Woods has this Bears team playing some inspired hockey. None of our local teams will be winning a championship this year. Maybe seeing Hershey get the job done can ease your pain.