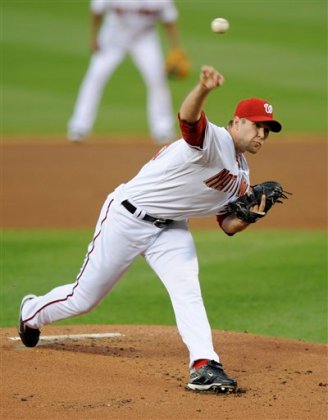 Win, lose or draw there’s one thing you can definitely say about the Washington Nationals – they’re entertaining.

Clinging to a 2-1 lead heading into the fifth inning, the Nationals showed why they lead the league in errors (and comically bad defense) with 50. Starting pitcher Craig Stammen allowed San Francisco Giants outfielder Fred Lewis and shortstop Juan Uribe to reach base on a pair of singles and then they advanced to second and third after a sacrifice by Giants pitcher Tim Lincecum.

The rookie pitcher would have walked the bases full but his offering to outfielder Aaron Rowand was in the dirt and got past Nats catcher Josh Bard, allowing one runner to score. Had that been the end of it, no one would have given the play a second thought. But for some reason, Bard decided to slide on his knees and blindly throw the ball in the general direction of home plate in a futile effort to get Lewis out. Unfortunately Bard’s throw was nowhere near the plate and sailed past Stammen, allowing Uribe to easily score as well. The only thing the play was missing was clown music. Or maybe Bob Uecker as the voice of a drunken Harry Doyle doing play-by-play.

Sure the Nats ultimately beat the Giants 10-6 and snapped a six-game losing streak, which is no small feat for a 14-36 team. But this play illustrated once again just how far this team has to go before it can reach a point where people feel like they’re watching a legitimate professional franchise. The New York Yankees set a major league record this week by going 18 games without committing an error. Conversely, the Nationals can’t go 18 batters without finding a way to screw up a seemingly routine play.

It’s too bad the Chicago Cubs have coined the term “Loveable Losers.” These Nats might not win very often, but you honestly can’t help rooting for them. The best part of gameday at Nats Park is watching the Racing Presidents just to see Teddy Roosevelt find a new heartbreaking way to lose every night. It’s not any different when the Nats take the field. They’ve got the worst earned run average in baseball (5.69). They’ve blown the most saves (13). They’ve committed the most errors. But at the end of the day, these guys are our losers.

We’ll rally around them now during the tough times just so that once they finally turn the corner and look halfway respectable it’ll be that much more gratifying. It happened for the Capitals. Hopefully, one of these days, the same will hold true for the Nationals.