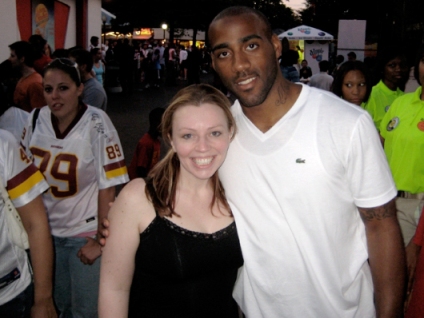 You might have heard that the Washington Redskins invited players, team employees, their families and select VIPs out to Six Flags yesterday. Well, for some reason, an invitation was extended to us (even though last we checked, we are not a player, team employee or VIP).

And right out of the gate, let us say this event was a blast. The environment was completely family friendly and the weather was absolutely perfect. We never waited more than a few minutes to ride any of the roller coasters and regularly ran into many of the players and their families, who were more than happy to pose for photos and/or sign autographs for fans. Clearly these guys were just as happy to be at an amusement park as the fans who flocked to see them.

We hope anyone who has ever dreamed of being a superstar athlete saw the hoard of fans surrounding Portis throughout the event. We never actually saw him partaking in any of the rides or festivities because any time we ever caught a glimpse he was simply signing autographs for dozens and dozens of burgundy and gold fans. Here’s hoping the players got in before the gates were opened to the fans just so C.P. might have actually had some fun too.

McIntosh was great because, as noted by Redskins blogger Matt Terl, he loves roller coasters. But unlike his teammates who happily used “jump-the-line passes,” he had no issue standing among the unwashed masses and waiting in line like the common folk. He was all smiles and was happy to chat with whoever was nearby (which is something media types rarely see from him). We’d be shocked to hear that anyone at Six Flags had more fun than Rocky did yesterday.

When we caught up with Hall he was busy scamming one of the guys from Comcast Sportsnet. He was playing one of the games where you have to sink a basket in a ridiculously tall hoop to win a prize. He paid his money and took a couple warm-up shots, all of which he missed. Once he and the Comcast guy (who shall remain nameless) had a dinner wager, Hall promptly sank three out of four shots while letting his buddy know he got played. All of this was going on while Hall signed autographs and posed for photos with dozens of ‘Skins fans (who also enjoyed the show).

And finally there’s Williams, who up until yesterday we had had little to no interaction with. At 6-5 and roughly 400 lbs., it’s impossible not to notice when he’s nearby. And every single time we saw someone go up to Williams, he kindly stopped what he was doing and was happy to oblige. Dan Steinberg just did an interview with Williams and said it’s tough not to cheer for the guy. We walked away with the same feeling.

All in all, yesterday was a very enjoyable evening that was made possible because the Redskins decided to do something nice for their extended family. We were lucky to be able to attend and immensely enjoyed seeing many of our favorite people – from both on and off the field. For better of worse, the Redskins brain trust gets blasted whenever someone feels they don’t get the job done, but let us take this moment to thank everyone who made this possible. We can’t think of a single way to improve the event.