take the money and run 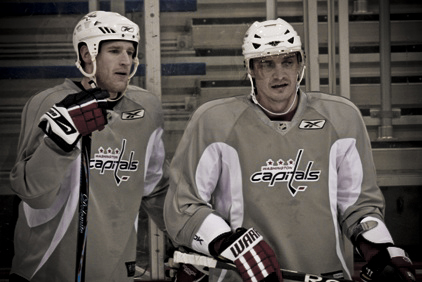 [Editor’s note: Sorry for the lack of posts over the last week or so. A hectic work schedule and a quick trip to Denver prevented us from our regularly scheduled programming. Things should be returning to normal now, so let’s get on with it.]

The Washington Capitals season has come and gone and now it’s time to start thinking about the future. Now, the Caps face several questions as far as which of the team’s pending free agents should be resigned and which minor leaguers can/will make the jump to the big show next season.

Compounding matters is the fact that the NHL’s salary cap will more than likely either stay the same (it was $56.7 million this season) or possibly even go down, giving a team like Washington (who was nearly maxed out this year) even less wiggle room to operate.

For starters, the team has three forwards scheduled to become unrestricted free agents July 1st – Sergei Fedorov, Viktor Kozlov and Donald Brashear. Each player brought a very different skill set to the team this season and all three, at various times, have been linked to reports that they’ll be leaving the NHL in favor of Russia’s Kontinental Hockey League.

We’ll start with Fedorov, the 39-year-old future Hall of Famer who was brought in to show this young and talented team exactly what it takes to win at this level. On the ice, Fedorov is savvy veteran who is above average in the faceoff circle and can even drop back and play as a defenseman in a pinch.

Some might think he’s simply a big-name player collecting a paycheck (he made $4 million last season) because he was great a decade ago, but that’s not the case. He may not be among the league’s point leaders anymore, but Fedorov is still a contributing member on the Caps as evident by his 11 goals and 22 assists in 52 games.

At 6-5 and 235 lbs., Kozlov is a bear of a man. He’s a big body who, when he feels like it, can do the dirty work and dig a puck out of the corners. The 13-year-pro finished the season with 13 goals and 28 assists for 41 points in 67 games and was often paired with Alex Ovechkin and Niklas Backstrom on the Caps’ top line.

One of the 34-year-old’s biggest assets is the fact that he excels at the shootout, which is helpful during the regular season. Unfortunately for Kozlov (who made $2.5 million last year), there is no shootout in the postseason. In a related story, Kozlov has just four career postseason goals in 35 games (with all four coming this season).

Rounding out the trio we have Brashear, a soft-spoken 37-year-old who prefers to let his fists do the talking for him. We’d list his statistics, but honestly, who cares? He’s on the roster to ensure other teams don’t take liberties on the Capitals’ top players. Brashear dropped the gloves 11 times last season, according to HockeyFights.com, and made $1.2 million. Sounds fair to us.

So at the end of the day, we’ve got three players who made a total of $7.7 million last season. Nothing against Kozlov or Brashear, but they are both ultimately expendable. Out of the three, if the team is going to bring anyone back, Fedorov makes the most sense. But if reports are correct and he’s been offered a two-year deal worth $7.6 million (tax free) to play back home in Russia, the Capitals aren’t going to be able to match it. They’ve got one year left to lock up Backstrom and/or Alexander Semin to long-term deals, so that kind of money simply isn’t available.

It’d be nice to get some, if not all, of the three forwards back. But if one final payday is out there and the Caps can’t match it, then they should each take it. No one is going to begrudge them for cashing in one last time and honestly, each of them helped to turn this franchise around. Their veteran presence in the Caps’ lineup will be remembered long after each has hung up their skates.