a different side of hall 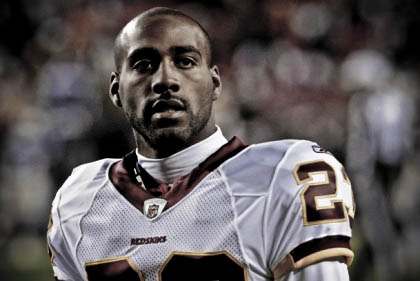 Cornerback DeAngelo Hall was one of the few bright spots in an otherwise forgettable season for the Washington Redskins last year. After being run out of Oakland, Hall joined the ‘Skins for the final half of the ’08 season and had an immediate impact – making plays and shutting down opposing receivers. He was a playmaker for a defense that consistently ranks in the top 10, but simply cannot create turnovers.

This February, the 25-year-old was rewarded with a six-year $54 million deal that included $22.5 million in guarantees, guaranteeing he’ll remain in Washington for the foreseeable future.

We decided to catch up with Hall this week to see how he’s feeling knowing he’ll be around a while longer.

Before we get started, we wanted to ask – how was your offseason?

“It was good,” he said. “It was good. I didn’t have too much of an offseason, I’ve been up here all throughout the week working out with the team doing offseason workouts. I try to go home on the weekends to visit my kids and my family, but it’s been good though. So far it’s been all football.”

You told us before last season ended that you wanted to stay here and that’s exactly how things played out. You got a big, new deal so now you’re just going to sit back fat, dumb and happy, right?

(Laughs). “Nah, nah nah … I’m still working,” Hall said. “I think the whole $70 million thing in Oakland and all the success I had so early kind of made me a little bit too cocky, so I think being cut in the middle of the season definitely brings a person down to reality, whether it’s myself or Deion Sanders if he’d have got cut, I think it’d bring him down to reality and make him be a better player. You know, as odd as the whole Oakland situation was, I’m blessed to have gone through it because I’ve learned so much from it. This time around I’m so much more focused and in tune with what I need to do as a player to help my team win and to separate myself as one of the best.”

The other conspiracy theory making the rounds is that you and Carlos Rogers can’t be cool because you got paid and he hasn’t yet. You wanna go ahead and address that one too?

“Nah, we’re best of friends,” he said. “We’re best of friends. Me, him and [Fred] Smoot and I even still talk to Shawn Springs all the time. You know, we all understand the business side of it. Carlos understood what the situation was when I first got here and I understand he’s still, you know, waiting to get paid. I feel like he will get paid. That’s a big part of the reason I came and signed the contract I signed. I felt like we could definitely get him done in a year or so whenever it’s time to get him done, I felt like we could do that and keep this secondary around.”

How comfortable are you here at Redskins Park these days?

“I’m very comfortable,” Hall said. “This is home. It feels like the only jersey I’ve ever worn is this one, so I definitely feel confident and comfortable. I can’t wait to get going and win some games.”

Well if that’s the case, then it’s got to hurt to see a former Virginia Tech teammates like Macho Harris get picked up by a division rival like the Eagles, right?

(Laughs). “A little bit,” he said. “You know I had to make a call to some of those guys up there just to make sure they take care of him, but he’s going to be alright. But to go against him as a divisional foe, I definitely feel a little bit happy about it because I do get to see him twice a year as opposed to being somewhere out west, where I’d never get to see him. I’m definitely happy about that. But trust me, we won’t take it easy on each other.”

How stacked is this defense now that they’ve taken an already talented lineup and added Albert Haynesworth, Brian Orakpo and brought you back into the fold?

“We’ve got a bunch of studs, man,” Hall said. “But we’ve still got to prove it. No matter how good it looks on paper, we’ve still got to go out there and Orakpo has to be able to drop back like a linebacker and then on third down be able to rush the quarterback. Albert still has to get pressure on the quarterback and I have to play like I played in the second half of the season or it doesn’t work. Carlos has to go back to the Pro Bowl level he was playing. With Fred, LaRon [Landry], it’s the same thing. We all still have to go out and do the same things we did. Just because we have different pieces in place doesn’t mean it’s automatically going to work. We still have to go out and give it our all and try to be the best we can.”

“Hopefully,” he said. “Especially up in New York. It’s going to be fun, especially against a divisional foe. We’re definitely going to go out there and try to beat them up.”