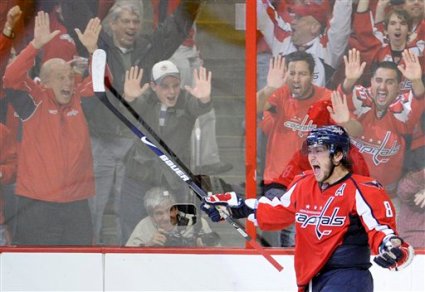 If you’re a Washington Capitals fan, there’s a lot to like so far about this second-round matchup with the Pittsburgh Penguins. For starters, Simeon Varlamov continues to give every indication that he’s the team’s goalie for the next decade – even if he’s played in less than 20 career NHL games.

With Varlamov playing at a level Caps fans haven’t seen since Olaf Kolzig led Washington to it’s one and only Stanley Cup finals back in ’98, it’s also made the rest of the team more confident. The defensemen, even when a minor league call up like Tyler Sloan is thrust into the mix, are no longer seen as a liability. Everyone knows Mike Green, but even on a night like last night when Green was off, the rest of the guys were able to pick up the slack. Milan Jurcina hits anything and everything near the net these days while Sloan and Brian Pothier, two unheralded defensemen if ever they existed, both picked up assists last night.

The line of Brooks Laich, Matt Bradley and David Steckel continues to make things happen. On a night when Alex Ovechkin and Sidney Crosby, two of the league’s biggest stars, registered their first career playoff hat tricks, Steckel was the only other player to find the back of the net. Not Alexander Semin. Not Evgeni Malkin. David Steckel. The guy who had all of eight goals during the regular season now has goals in both games against the Penguins.

And with all that being said, here’s the kicker – the Capitals still haven’t played a complete game yet this series. In the first game they started slow, gave up a goal to Crosby in the first five minutes and then slowly woke up and realized a playoff game was going on. Thanks to some unreal goaltending by Varlamov they were able to scrape together enough to steal a victory. After game one, Steckel even said that this team needs to stop “getting behind the eight ball” early in games and have a stronger showing early on in games. So what happens in game two?

The Caps stumble out the gate yet again and go down 1-0 in the first and then 2-1 in the second period. Not exactly what the guys had in mind. But as the game went on, the Capitals again were able to pick up their level of intensity and made plays when they needed them. The Caps have now won a franchise-record five-straight games, taking a two-games-to-none lead on Pittsburgh in the process.

In the early stages of round one against the New York Rangers, the Capitals couldn’t put together a complete game and lost the first two games of the series. This time around, less than their best is still somehow good enough to get the job done. It’s scary to think what will happen if/when the team shows up from the very first drop of the puck and skates for a complete 60 minutes. They’ve got enough talent and seemingly enough playoff experience now to know how to win playoff hockey.

“We’ve got the guys who never quit,” said coach Bruce Boudreau in his post-game press conference. “Not only the Alexes and Nick [Backstrom] and that, but the other guys that I’ve coached in the minors, never quit when we were down. They’ve been down numerous times in championship games and they’ve come back. I’m pretty sure of their character and I know they would never quit.

“They’ve never failed to come back yet, so far, so I’m keeping my fingers crossed,” Boudreau said.

Meanwhile, leave it to the biggest star on the hottest team in hockey to put it all in perspective for us.

“It’s unbelievable when we play against great players and you win the game like this,” Ovechkin said. “If I was a Capitals fan, I’d be really happy right now.”