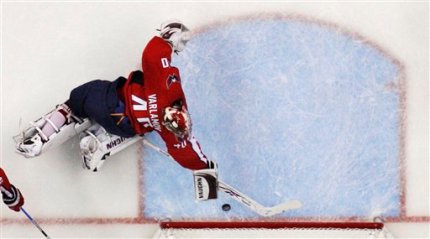 Simply known as “the goal,” Alex Ovechkin’s effort against the Phoenix Coyotes his rookie season will always have a place in the hearts and minds of Caps fans because of the sheer degree of difficulty.

After being knocked down by defenseman Paul Mara and while sliding on his back and facing away from the net, Ovechkin was able to hook the puck with one hand on his stick and somehow slide it into the net past goalie Brian Boucher for one of the most unique goals ever scored in hockey history.

Well, after game one of the Capitals series against the Pittsburgh Penguins has added a second highlight. You can simply call this one “the save.”

With the game tied at 2-2 in the second period, Capitals goalie Simeon Varlamov made a desperate diving stick save that robbed Pittsburgh Penguins center Sidney Crosby of a layup in a game the Caps ultimately held on to win 3-2. Varlamov made 34 saves on the day, but none were bigger and more memorable than this one.

“There was no other option left to me,” Varlamov said through an interpreter. “I had to just play it with my stick. There was nothing else I could do and frankly, if he put the puck anywhere else, it would have been in the net. I guess it was lucky.”

Was this the best save of your career?

“I’d say yes, it’s one of the best,” Varlamov said. “Especially considering the kind of game it was, in the NHL playoffs. I haven’t made any saves like this before. The way the game went, it was a very important save. The score was 2-2 and if they scored a third goal, then you know how it would go on.”

Giving up a goal to Crosby in the first couple minutes of the game could have rattled a 21-year-old goalie, right?

Strong words from a guy who has now played in more career NHL postseason games than regular season games (seven to six). But what did everyone else think of “the save?”

“It was a great save,” said Capitals coach Bruce Boudreau. “There’s no doubt. Goalies are taught never give up. You look at all the great goalies that are in hockey nowadays. No matter where the play is, they never give up. They keep fighting. And that’s the only way the [Martin] Brodeurs, the Tim Thomases and the [Roberto] Luongos look like they make great saves, it’s because they never quit on the puck. It was obviously a turning point because they would have had the lead and we would have had to play catch up.”

Penguins Head Coach Dan Bylsma was also asked for comment on the play of the game.

“From our perspective at the bench there was a lot of bodies in front of us,” Bylsma said. “You could kind of see that there was probably an open net. Then we saw the replay on the jumbotron. He made a spectacular save. There was an open cage and I think Sidney [Crosby] was on his backhand and he [Varlamov] put his stick back there and got it right on the goal line.”

But enough about Pittsburgh. No one really cares what they have to say. Let’s hear from some of Varlamov’s teammates.

“Yeah, that was awesome,” said forward David Steckel. That was the turnaround save for us. Because I thought up to that point they were really working us down low and we had no answer. He bounced back from, probably what he would say was a soft goal, so he did great tonight.”

Seriously, guys, how the hell did Varlamov keep that puck out of the net?

“I don’t know how he can get the puck, it’s hard to say,” said center Nicklas Backstrom. “It’s amazing and that reaction he has all the time, that’s pretty amazing of him. Hopefully he can keep doing it and we can win some games.”

Nicky, it’s okay to get a little fired up about it. Anyone wanna show Backstrom how it’s done?

“I was stunned,” said forward Brooks Laich. “I was like ‘Oh my God.’ I was amazed. I saw Crosby shoot and I was like ‘Aw that’s in,’ then he just reaches back and grabs it and the whole bench was like ‘Wow, that’s our break, let’s get going, we got to smarten up and play better.’ Incredible.”

Much better. We’ve saved one last perspective on “the save.”

“Yeah but I try to forget them though,” Crosby said when asked about Varlamov absolutely stoning him. “I don’t need to discuss them (the big stops). You don’t want to waste those opportunities. You want to take advantage of it. You end up losing the game 3-2 and you don’t want to look back and say, ‘What if?’ The fact is, that happens in the game. As a player you have to forget that quickly.”

Crosby might try to forget Varlamov’s heroic effort from game one, but trust us when we say that it’s a play Caps fans will remember for a long, long time.