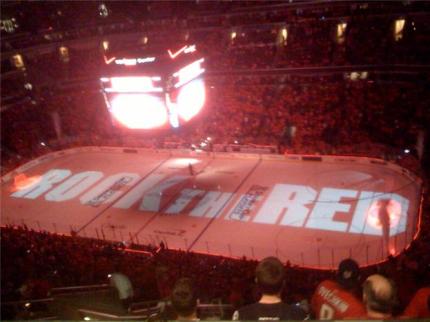 Much like the rest of our nation’s capital, a good chunk of the Washington Redskins roster is currently transfixed on the Capitals current playoff run. Even though the ‘Skins were attending minicamp out at Ashburn this weekend, several of the players like tight end Chris Cooley and kicker Shaun Suisham told us they’d have much rather been out at the Verizon Center “rocking the red” while the Caps battled the rival Pittsburgh Penguins.

In fact, we even learned that Redskins coach Jim Zorn will be attending game two of the Caps-Pens series Monday night. While we weren’t able to pull him away from running his football team, we were able to track down some of the guys who have been regularly spotted at Capitals game this season.

Hey Cooley, after all that trash talking on your website, I know you’re looking forward to Sidney Crosby coming to town, right?

(Laughs). “You know what, it was Tanner who said anything about Crosby,” said Chris, promptly selling out his brother in the process. “I’m a faithful Caps fan, so I’m not a Crosby fan, by any means. He’s a good player, but I’m not going to say I’ll root for the guy. I’m an Ovie fan.”

So what you’re saying is you’d rather be at Caps-Pens game one rather than working up a sweat out here at Redskins Park?

“Hell yeah,” Cooley said. “It’s just for game one, so I’ll deal with it. Hopefully I can get out to a couple games after this weekend.”

Speaking of Caps-Pens, we asked some of the players to put this rivalry in perspective for us.

“I’ve definitely heard that the Pittsburgh-Capitals series is a big-time series,” said quarterback Jason Campbell. “It’s always a battle and is one of the biggest rivalries in hockey, like when we go against the Cowboys. It’s fun, and I’m definitely trying to get out to a couple more games. I was there at game seven last week.”

Were you sitting in a luxury suite or something? We didn’t spot you down by the ice where you normally sit?

“Yeah, I was in one of the boxes,” Campbell said. “I was keeping it low key because I’m trying to learn the game a little bit.”

Okay, so let’s get serious. We need your prediction on the Caps-Pens series. Who will win and in how many games?

“I got the Caps in five or six games,” Campbell said.

From there we ran into offensive lineman Stephon Heyer, who was also in attendance for the Capitals series-clinching victory over the New York Rangers last week.

Was that your first Caps game?

“No, it wasn’t my first Caps game,” Heyer said. “But it was the first playoff game seven I’ve ever been to in any sport. It was wild, man. Those guys were flying around and I just love the sport. Those guys were getting after it and you could tell it was the playoffs. You can definitely tell the difference between a regular season game and a playoff game.”

Since you’re familiar with the Capitals, how would you compare their rivalry with the Penguins to you guys and the Cowboys?

“I guess it’s about the same,” he said. “We definitely don’t like each other and we’re definitely playing to win. We definitely strive to win and you could feel it out there. Those guys are the same way.”

Coach Zorn is going to game two. Are we going to see you out there for another game?

“Man, if I can wrangle up another ticket, I’ll go,” Heyer said. “I definitely want to go because those guys are really good at what they do and I wish them the best.”

Bottom line, how do you see this series playing out?

With an answer like that, someone in town has to have an extra ticket for Heyer, right? Seriously, how can anyone not call Redskins Park this morning and hook the big guy up with a ticket or two after going on record saying the Penguins simply cannot compete with the Caps?