stumbling into plan B 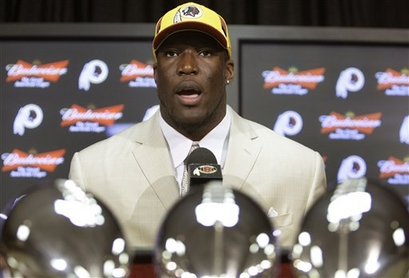 When the Washington Redskins backed into Plan B – namely defensive end Brian Orakpo, out of the University of Texas, we coulnd’t help but cry a single tear of joy.

More times than not, if Redskins owner Daniel Snyder wants a shiny new toy, he gets his wish. When “The Danny” swung and missed in his attempts to acquire disgruntled Denver quarterback Jay Cutler via trade, we knew he was unhappy. Once word broke that Snyder and friends were enamored with USC quarterback Mark Sanchez, there was little reason to believe they wouldn’t find a way to get him into a burgundy and gold uniform by any means necessary. “The Danny” losing a bidding war once a year is rare. Losing twice in the same calendar year is simply unheard of.

And yet, that’s where we are. When it was all said and done, the New York Jets pulled off the deal to move into the top five and select Sanchez, and the ‘Skins were forced to regroup and move in a different direction. Instead of bringing in a flashy name who plays a position that shouldn’t be a top priority, the Redskins had to “settle” for one of the best defensive players in the entire draft. And, oh by the way, this stud just so happens to play a position of need – dating back to even before the ‘Skins sent defensive end Jason Taylor packing.

A two-year starter at Texas, Orakpo emerged in his senior season with a team-high 11.5 sacks, which ranked sixth in the country. He chipped in 40 tackles, including 17.5 stops for loss, and 15 pressures in 12 games. For his career, Orakpo started 21 of 49 games, registering 103 tackles, with 23 sacks for 187 yards lost, 34.5 tackles for loss totaling 210 yards and 36 pressures. He also forced six fumbles and recovered one.

And in a nice twist, Orakpo went to Lamar High School in Houston, Texas, where his team was named … you guessed it … the Redskins.

“We are so excited to be a Redskin,” Orakpo said during his Monday press conference at Redskins Park. “It’s so ironic because I was an official Redskin in high school. We modeled the Washington Redskins, and now I went from a Redskin to a Longhorn, back to a Redskin. My high school coach told me, once you’re a Redskin, you’re always a Redskin. So that was a great honor.

“I’m looking forward to playing in front of 90-plus thousand in the huge stadium that you guys have,” Orakpo continued. “It would be wonderful and a great opportunity to be productive and be effective in front of a huge crowd on every Sunday so this is a huge honor for myself. Like I said, it’s a dream come true.”

So you’re saying to yourself, this sounds too good to be true. Orakpo goes to a random high school where he just so happens to be a Redskin and now, he’s playing that up to win over D.C. It all sounds just a little too convenient, right? There’s no way he actually knows anything about the ‘Skins, right?

“As far as defensive end-wise I just want to continue that great tradition we have,” Orakpo said. “Obviously you have two great Hall of Famers, Dexter Manley and Charles Mann, they have done a great job and I just want to really show those guys and the rest of Redskins Nation that I am a guy that’s here ready to work, come in humble and compete and most importantly win, that’s the most important thing.

“Like I said, I’m joining a great defense with outstanding teammates,” Orakpo continued. “Albert Haynesworth, London Fletcher, LaRon Landry, I could name them all and just to have my name amongst those guys is a huge honor and a huge accomplishment. These are guys I used to watch every Sunday when the Redskins would play. I’m just so excited, so ecstatic to be here. Once again, obviously they finished fourth in the NFL in defense and I just want to bring my skills and what I can do to help. First of all, I have to compete and earn my job, earn my position on the team and also earn my respect. So thank you very much Redskins Nation for having me, I am honored to be here, delighted, and lets keep this train rolling.”

Last year the Redskins used their first selection on Michigan State receiver Devin Thomas, a nice enough fellow, but a guy who won a Madden ’09 tournament against fellow rookies while using the hated Dallas Cowboys. This year, the team found a way to infiltrate Texas and steal a big-time talent who had already learned to embrace being a Redskin. Well played front office.

But let’s not go overboard patting Snyder and Vinny Cerrato, the team’s executive vice president/football operations, on the back just yet. We haven’t gotten to our favorite part of the story. Let’s go back to Saturday, when the Jets made the move to swap picks with Cleveland and steal away Sanchez. While they’d never admit so publicly, Snyder and Cerrato were blown away that another team dared to compete for the “offseason champions” title. Suddenly, they were sitting there with six whole draft picks and a little egg on their face. How ever could they recover from the public humiliation?

“I talked to about five teams ahead of us to try and get Brian [Orakpo] and everybody wanted to make their picks,” Cerrato said. “I called Denver and said do you want to flip flop and he said ‘you are going to get your guy.’”

So let us get this straight – other teams feel so bad for the Redskins that they don’t even feel right taking advantage of them anymore? Cerrato called Denver and basically said, “I’ll hold out my wallet. You take as much as you need so we can move up one spot to get our new shiny toy.”

Typical NFL protocol suggests that Denver would remain tight-lipped about their draft plans and steal a free pick or two away from Washington while still ending up with their player, in this case, running back Knowshon Moreno. But the ‘Skins front office is so inept, other teams simply cannot bring themselves to pick on them anymore.

Despite their best efforts to sabotage draft weekend, the Redskins walked away with a glaring hole in their lineup filled by one of the best overall players coming out of college. While it’s embarrassing that the Redskins are officially viewed by their peers as the kid who licks the window while wearing a helmet on the school bus, it’s almost worth it to know that somehow, some way, the ‘Skins might actually end up keeping their own draft picks and inadvertently begin building the team through the draft like a sensible franchise. Crazy talk, we know, but a man can dream, can’t he?