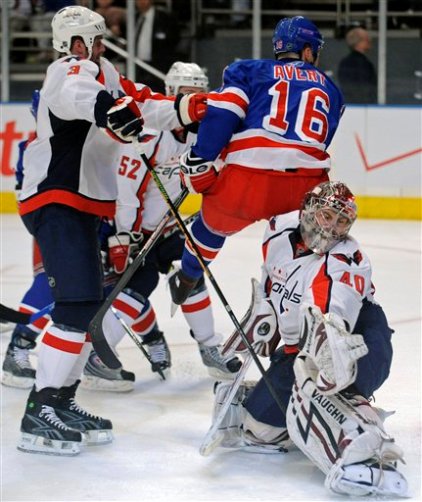 Can anything rattle this kid?

After the Capitals dominated the New York Rangers in a 4-0 victory at Verizon Center Friday night we had just one simple question for Caps rookie goalie Simeon Varlamov – does anything rattle you?

“There is some things that can rattle anybody. If anything can rattle me, then I’m definitely not sharing that now,” said Varlamov, through an interpreter.

So much for the direct route. That left us, much like the Rangers, searching for answers on a kid who finally turns 21 today.

“You can’t say enough about him – especially for a guy who’s so young. To be so composed and battle so well in big games like this, it’s just unbelievable and we’re really happy to have him,” said forward Matt Bradley of the Capitals’ new long-term solution to a once-questionable goaltending situation.

“Yeah it’s amazing, at such a young age to be so composed and confident,” said defenseman Mike Green of Varlamov. “It’s great. For him to come in and step up and play the way he has, has been the difference for us.”

But here’s the thing – as good as Varlamov has looked since taking over for Jose Theodore in net (and he’s been outstanding), he hasn’t been needed. The biggest obstacle the Caps have faced in this series wasn’t erratic goaltending or even the opposition. It was themselves. The only reasons this team trailed New York three games to one were self inflicted.

This talented but young team forgot what it takes to win playoff hockey. They got too cute with the puck. They refused to get anywhere near the crease to actually challenge Rangers goalie Henrik Lundqvist. They suffered mental lapses at crucial moments. They forgot that it was legal for anyone not named Alex to score with any sort of regularity. They looked lost and en route to a very disappointing finish to a once-promising season.

The Capitals squad that we all know and love has finally shown up to play and is once again a force to be reckoned with. Everyone has once again bought into coach Bruce Boudreau’s system. Role players are doing what’s asked of them and the stars aren’t trying to do it all by themselves. And more importantly, the rumors of a supposedly impenetrable force named “King Henry” stopping anything and everything in his crease seem to be greatly exaggerated.

Lunqvist hit the showers early Friday night after allowing four goals on just 14 shots to the Capitals in Washington. Two days later, it was more of the same as Lunqvist was pulled after allowing five goals on just 20 shots. After stopping 141 of 149 shots in the first four games (good enough for a .946 save percentage), Henrik has looked like anything but royalty saving just 25 of 34 shots (.735 save percentage). That’s not how you put away any opponent on the brink of elimination, which explains why he’s been left to ride the bench in the third period of each of the last two contests.

On the other side of the rink there’s Varlamov, who has stopped 124 of 130 shots he’s faced (a downright nasty .953 save percentage) while giving up just six goals in five games (for a 1.20 goals against average). Oh, and he’s got two postseason shutouts already. So maybe he has been needed.

(And we feel compelled to point out that if Lundqvist is “King Henry,” then the guy on the other side of the rink should henceforth be referred to as “Lord Varlamov.” It sounds good and our nerdy friends seem to think a lord outranks a king or something).

What stands out most is how much more dependable the defensive rotation looks these days. Any time Theodore gave up a “softie” the entire team, defense included, looked deflated. And while the current crop of Capitals defenders is still thinner than you’ll find on a standard-issue Stanley Cup champ, they’re playing much better because the don’t have to spend any time looking over their shoulder.

Varlamov makes the saves he’s supposed to (and more than a couple he probably shouldn’t). Knowing he’s got their backs means guys like John Erskine and Milan Jurcina can focus their attention on other issues, like clearing out traffic and/or imposing their physical style of play on anyone dumb enough to crash the net.

Up front, role players like Matt Bradley and David Steckel seem to be playing with more confidence and are flying around the rink. Those two, on a line with the always dependable Brooks Laich, have formed a surprisingly-solid checking line than has done wonders against the Rangers.

Bradley’s two goals in game five (after totaling just five goals in 81 games this season) provided the first cracks in King Henry’s armor and his teammates have followed suite. Since then, guys like Jurcina, Tom Poti and Viktor Kozlov have all tallied goals to provide the much-needed secondary scoring to go with the typical production of guys like Alex Ovechkin, Alexander Semin and Mike Green. In their last two wins, the Caps have outscored New York nine goals to three and trust us, it hasn’t been that close.

So this is where we stand now, heading into a pivotal game seven Tuesday night in D.C.

Teams have trailed 3-1 in a best-of-seven series 229 times and have come back to win the series on just 20 occasions (eight percent). But we’ve seen No. 8 play, and he’s pretty good. And not only that, but he’s brought a few fellow Russians with him who know how to play the game as well.

History suggests that the Capitals’ final game of the season will be Tuesday, but momentum and stellar play from guys like Ovechkin and “Lord Varlamov” could help make this team the exception to the rule.