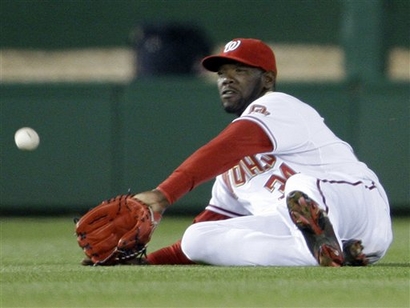 This past weekend, Washington Nationals outfielder Elijah Dukes was fined $500 and benched for being late to a game against the Florida Marlins.

Nats acting general manager Mike Rizzo and (acting) manager Manny Acta opted to fine and bench Dukes because the controversial outfielder was late and his excuse was not a team-sponsored event. They even went as far as to warn Dukes that if he was tardy again, he could be demoted to the minor leagues. Sounds great, right? The team should be applauded for trying to instill discipline and accountability to a young and immature lineup, right? In the words of the immortal poet Lee Corso, “Not so fast, sweetheart.”

Dukes was running behind because he was speaking with the Great Falls Little League in Northern Virginia. After addressing the kids, he stuck around to sign autographs and watch a parade of little leaguers, so he got to the ballpark a few minutes later than he intended. He didn’t miss the start of the game, he simply arrived late for warm ups, stretching, etc.

“We are going to change the culture here, regardless of how well a guy is playing,” said Acta. And why wouldn’t he? I mean, what kind of message does it send when a player goes out and gives back to the local community? The Nationals have gone out of their way to alienate the local fanbase since the moment they arrived in town and here’s this jerkwad trying to do his own thing. This kind of insubordination simply cannot and will not be tolerated. Clearly this is grounds for waterboarding.

When the idea of a professional baseball team relocating to our nation’s capital was first broached, I was all for it. In my lifetime your choices were to either cheer for the Baltimore Orioles, who were a great option until Peter “Satan” Angelos came into the picture, or don’t watch baseball. Sure, bandwagon fans could jump on the Yankees, Red Sox or Cubs because that’s what trendy people do, but that wasn’t really my thing. So I stuck with the Washington Redskins, Capitals and Bullets.

But then Major League Baseball, even in spite of Angelos’ protests, brought baseball into the fold. Before the start of the 2005 season, the Montreal Expos relocated to Washington D.C. and became the Nationals. A new generation was ready to whole-heartedly embrace the national pastime. Or at least that was the plan.