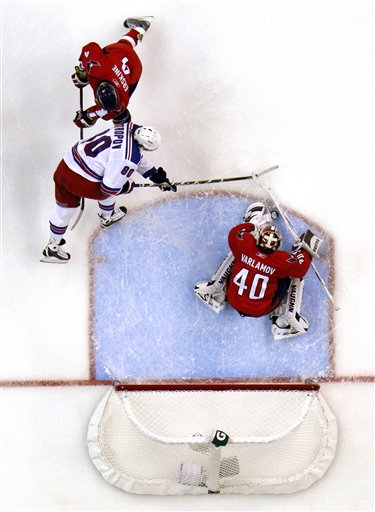 The story of game two was rookie goalie Simeon Varlamov, he of just five career NHL starts. The 20-year-old got the nod over Jose Theodore, who looked pedestrian allowing four goals on 21 shots in a 4-3 game one loss to the New York Rangers.

Sure, Varlamov posted a 4-0-1 record with a 2.37 goals against average and a .913 save percentage during the regular season, but this is the playoffs. You make a move like this and it backfires and you’ve essentially guaranteed yourself a one and done for the postseason. Benching your only goalie with any sort of playoff experience removes the safety net. For better or worse, from this point on, your Stanley Cup fate is essentially tied to an unproven rookie.

Heading into his first-career playoff start, we loved the kid’s instincts, pure athleticism and the general X-factor Varlamov brings to a game, but let’s be honest – this was about as ballsy a move as Bruce Boudreau could humanly make. Could the kid live up to the supreme expectations? Did the move completely alienate Theodore? Whatever the case, this series became one of the biggest can’t-miss first-round matchups the moment Boudreau made the switch.

As we all know by now Rangers forwards Marcus Naslund and Ryan Callahan executed a two-on-one breakaway to perfection, beating defenseman Tom Poti and Varlamov with 12:16 left in the first period for the only goal of a day. Although Varlamov was sharp and showed no signs of a young goalie in over his head, the Caps now trail the Rangers two games to none as they head to New York.

Thanks to a Russian journalist who was willing to play translator, we (along with the rest of the media) were able to catch up with Varlamov in the locker room after his postseason debut.

What did you think of your first NHL playoff game?

“The first thing I thought was this was a very important game because you don’t want to go down 2-0 in the series,” Varlamov said. “Now it’s going to be very difficult for us to play in New York, but we’re ready for it.”

Did the long delay before the game started rattle you at all?

“Yeah, I was bothered by it frankly,” he said. “There was a bit of an incident down on the ice because the goal wasn’t fixed in properly and it kind of bothered me.”

Were you nervous at all?

“It’s normal for a goalie to be nervous before a game, so yeah I was,” Varlamov said. “But it’s not really that bad. It’s not like it was in Montreal before my NHL debut when my hands were shaking.”

Do you think you should continue to play?

“Well of course I want to play, it was my dream from childhood – it is not a secret,” Varlamov said. “Anybody who is on this team wants to play. We did play well both on offense and defense, we just couldn’t score and of course, [Rangers goalie Henrik] Lundqvist was great.”

Did Theodore say anything to you before the game?

“After the warm-up, he walked over to me and say ‘Don’t worry about it. I was 20-years-old when I play my first game, it was in Montreal. You know don’t worry about it, I think you’ll do fine,’” Varlamov said.

According to the Caps’ media relations department, Varlamov joined Jim Carey, Byron Dafoe and Bob Mason as the only rookie goalies to ever start a playoff game for Washington. Also, Varlamov became the 19th goalie in NHL history to make his playoff debut before his 21st birthday Saturday afternoon and stopped 23 of 24 shots (for a sparkling .958 save percentage).

Even though he only allowed one goal on the day, Saturday was the first regulation loss of Varlamov’s career. His combined regular season and playoff goals against average is 2.16 and he has a save percentage of .923. With numbers like, it’s easy to see why Boudreau would turn to the kid in such a high-stakes situation. Now, if only the offense could remember what it takes to light the lamp, the Caps just might have what it takes to become a legitimate contender.