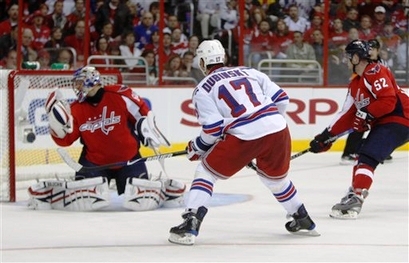 The Washington Capitals finished the regular season with 108 points, the most in franchise history. But that meant absolutely nothing to the New York Rangers, who came to the Verizon Center as the seventh seed in the Eastern Conference and stole game one, 4-3.

Capitals goalie Jose Theodore went 32-17-5 during the regular season, but came into the game with a pedestrian 19-26 career playoff record. To say all eyes were on him heading into the series would be a vast understatement.

The Rangers scored an average of just 2.44 goals per game during the regular season, third lowest in the league. And yet, their offense exploded for four goals on 21 shots – none of which were particularly impressive. Any questions on whether Theodore is a dependable goalie come playoff time remain unanswered.

“For playoff hockey, obviously, [I was] not good enough,” Theodore said. “They only had a couple of shots in the first, and after that, I tried to find a rhythm. I’m not happy with my game. I wasn’t good enough. But in the playoffs, you bounce back and that’s it – you have to turn the page. I’ve been around long enough that there’s really no excuse. When you’re out there, you have to be ready to make a couple of key saves and key moments, and tonight, that just wasn’t the case.”

One of the first questions Capitals coach Bruce Boudreau faced in his post-game press conference was essentially, “Theodore said he wasn’t good enough tonight. What do you say to that?”

“He’s right,” Boudreau said. “There’s times when you sit there and you can say that I didn’t make the save that was needed. But I’m sure he’s going to bounce back. He’s a professional and he’s played this game long enough. I’m sure he feels bad enough.”

So coach, did you consider making a switch in net – pulling Theodore in favor of your talented, but unproven backup Simeon Varlamov?

“Not during the game. They scored the fourth goal and there were seven minutes to go in the game. That’s not the time to put your backup goalie in. You never want to look like you are panicking and that’s what that would have looked like.”

What about for game two?

“There’s a chance anything can happen,” Boudreau said. “I said earlier, when you lose, you make changes. I’m not saying in goal, but there’s a possibility of changes in a couple of positions out there.”

While on the subject of possible changes for game two, may we humbly suggest that defenseman Jeff Schultz be scratched from the lineup. Longtime readers know our stance on Schultz – he’s got a big body and loads of potential, but he’s allergic to contact and as a wise man once said, “potential just means ain’t done shit yet.”

Watching Schultz get embarrassed by Rangers center Brandon Dubinsky on the eventual game winner just reinforced our belief that the 23-year-old defenseman is not ready for prime time. As Dubinsky skated down the wing Schultz crossed himself up while attempting to slow the speedy forward. Next thing you know, Schultz has tripped over his own feet and Dubinsky is celebrating a back breaking goal with just over eight minutes left to play.

We don’t want to make this just about Schultz. Truth be told he’s not the only reason the Capitals now trail the Rangers one game to none. But with the Caps already concerned about reliability issues with their goalie, the team would be wise to shore up the defense in front of whoever is in net. If that means sitting Schultz in favor of Brian Pothier or someone else, then so be it.

One final note, Theodore has gone 0-2 with a 5.00 goals against average and a .838 save percentage over the last two games. That’s bad. Add in the fact that the Florida Panthers and Rangers were 17th and 28th in scoring this season and that’s really bad. Theodore’s got two choices – he can either get it together now or spend his rapidly approaching offseason trying to figure out what the hell went wrong.