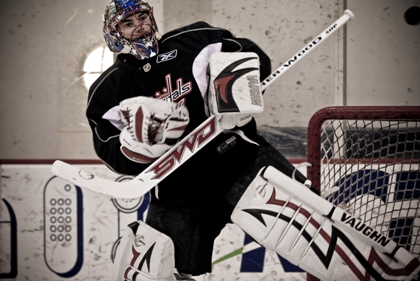 Alex Ovechkin hits anything and everything in his path. Brooks Laich crashes the net with reckless abandon. The rest of the roster? Not so much. This offense has the firepower to go toe-to-toe with anyone in hockey and when they’re clicking, this team scores some of the prettiest goals you’ve seen. But the funny thing about a high-risk, high-reward mentality is that whole “high-risk” part.

This is a team that would much rather make the highlight reel than dig in and get their hands dirty. The thing about the postseason is that brand of hockey rarely wins. The Philadelphia Flyers defeated the Capitals in the playoffs a year ago because they played ugly hockey. They used muscle, grit and determination to outlast the Caps. If things are going to be different this time around, then the home team needs to adapt and overcome. Just know that if the Capitals settle for long-range shots from the blue line and no one creates traffic in front of the net … well … it might be a short playoff run.

First it was Alexander Semin. Then it was Shaone Morrisonn. Lately it’s been Sergei Fedorov. For whatever reason, someone on this team feels the need to take ill-advised penalties in pivotal moments of a game. Coach Bruce Boudreau has often referred to these hooking, holding and tripping calls as “lazy penalties” and has pleaded with his players to be smarter. Referees tend to put their whistles away and give more leeway to teams during the playoffs, but a safer bet for the Caps would be for players to hustle more and clutch and grab less.

3. Their defense is a work in progress.

Even with a healthy Tom Poti and Brian Pothier in the lineup the Capitals’ defense isn’t going to strike fear into any opponent. The Steel Curtain they are not. That’s why a team like the Florida Panthers, who had already been eliminated from the playoffs, can monkey stomp a Washington team 7-4 even though the Caps were trying to set a franchise record for most wins in a single season.

In fact, four different times this season the Capitals gave up seven goals in a game. That’s simply unacceptable. Mike Green (31 goals), is a rare breed – a defenseman who is capable of scoring every time he touches the puck. But while Green contributes both offensively and defensively, the rest of the defense should be squarely focused on their defensive responsibilities. Why? The 13 Caps’ defenders who aren’t named Mike Green scored a total of 14 goals this season. So stop trying to jump up in the play and be more responsible in your own end.

4. Their goaltending situation could be a problem.

A hot goalie can be the difference between playing in or watching the Stanley Cup Finals. History has proven that a mediocre team like the Anaheim Ducks can catch lightning in a bottle if a goalie like Jean-Sebastien Giguere gets into a groove, but teams never, we repeat – NEVER – win despite their goaltender in the playoffs.

Seemingly all season long there have been questions surrounding Caps goalie Jose Theodore. When he’s on, he looks great. When he’s off, it’s ugly. Theodore won 32 games for Washington this season, but the 32-year-old has the lowest numbers (2.87 goals against average and .900 save percentage) out of the eight starting goalies in the East Conference playoff race. Brent Johnson is injured and no one else in the mix has even appeared in the NHL postseason. For better or for worse this Capitals team will live or die with Theodore.

5. They lack a killer instinct.

The Caps finished with the fourth-best record in hockey, but how many times this season did they lose to a cellar dweller? Colorado. Atlanta. Phoenix. Toronto. Los Angeles. They were shut out twice against Columbus. True championship contenders show up with the same level of intensity against the doormats as they do against the league’s elite.

5b. They lack a true leader.

Because of his stellar play, Ovechkin leads by example. But the Capitals lack one guy who commands respect in the locker room and is willing to say, “Sit down, shut up and listen.” Boudreau is a first-rate coach, but sometimes that kind of talk needs to come from outside the coaching staff. When the Denver Nuggets had Allen Iverson they were a middle-of-the-road franchise that barely qualified as the eighth seed in Western Conference. Too many players with too many motives.

After a 1-2 start this season Denver traded Iverson for Chauncey Billups, who won a ring in 2004, and he immediately changed the complexion of that team. He refused to let his teammates “half ass” it and called out players when the situation dictated. Now, the Nuggets are 54-27 and will likely enter the playoffs as the second seed. While the Caps win more games than they lose, they could still use a Chauncey Billups on the roster.