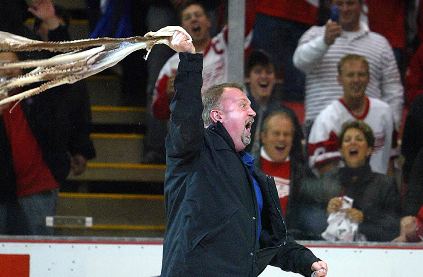 With the NHL playoffs just a week away, I wanted to take a moment and share with the class 10 reasons why I love hockey.

This hardware, which has been around since 1892, is the oldest professional sports trophy in American sports. Named after Lord Stanley, who was kind enough to donate the Cup, the trophy lists the name of every player and coach to ever win it. The best part is – there are actually several engraving errors on the Stanley Cup. How’d you like to earn the trophy only to learn you’re mistakenly listed as “Ted Kennedyy” on hockey’s holy grail?

Montreal goalie Jacques Plante takes the cake though. The Canadiens won six championships during his career and his name is spelled differently on the Cup five times. He’s listed as J. Plante, Jacques Plante, Jac Plante, Jacq Plante, and Jaques Plante. Don’t you think after the second typo he would have volunteered to be present when his name was engraved?

A couple of other random notes: Back in 1905, the Cup was punted into the Rideau Canal, which luckily was frozen at the time. The trophy was then forgotten and, thankfully, retrieved the next morning when everyone sobered up.

The Cup was actually abandoned and left in a studio where it served as a flower pot for months before someone realized what had happened and retrieved it. Alcohol was likely involved.

The Stanley Cup was stolen from the Hockey Hall of Fame twice within a five-year span in the late 60’s. No word on if it was taken by the same person or not or if alcohol factored in the crime.

9. Legend of the Octopus

Back in the day, when there were less teams and therefore less games to play in the postseason, all it took was eight wins to capture Lord Stanley’s Cup. With that in mind, a couple of brothers decided to throw an octopus onto the ice at a Red Wings game way back in 1952. Detroit went on to win eight-straight games and the rest is history.

Whenever I talk to a new hockey fan, the conversation inevitably ends up in the same area – for whatever reason, hockey just doesn’t translate well to TV. Diehards have no problems tuning into a high definition broadcast, but casual sports fans have a hard time keeping up and ultimately end up flipping the channel. While the league office might stay up late at night trying to find a solution to this problem, I actually think it’s a blessing in disguise. Hockey isn’t for everyone. Bandwagon fans are best served riding LeBron’s jock or buying yet another fitted Yankees cap.

But those folks who attend their first hockey game – especially those who grew up in places that never had snow or ice – end up falling in love with the game. Guys like Redskins quarterback Jason Campbell and cornerback Fred Smoot, who both came from the hockey-hotbed of Mississippi, took in one game and we’re hooked. It’s like a real-life fight club. Much of the world has no clue it exists, but those in the know gladly keep the secret.

Did I just say “fight club?” Yet another reason hockey is awesome is the sheer fact that these guys gladly police themselves. If someone gets out of line and takes certain liberties against your teammate, then you drop the gloves and teach that bastard a lesson. Basketball players look downright embarrassing when they try to throw down (it’s almost always a gangly, awkward slap fight) and football players end up grabbing each other’s facemask or spitting in an opponent’s face. Not in hockey. You cross the line, you can guarantee someone’s going to make you pay.