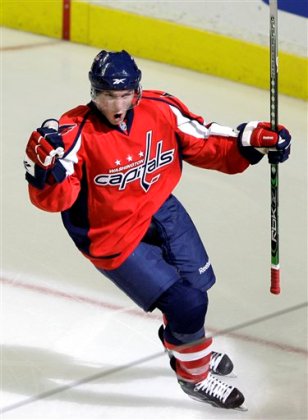 Those who missed the Washington Capitals’ 6-4 win over the Atlanta Thrashers yesterday might think the home team breezed to an easy victory over a lesser opponent. Those who watched the regular season home finale know that wasn’t the case at all.

Adding fuel to the notion that this team loves to sleep in and simply hates playing early games, the Capitals looked downright sluggish the first 40 minutes of the game.

“Our guys were sleepwalking through the first two periods,” said coach Bruce Boudreau. “It seemed like they wanted it more. It happens a lot when you depend on your power play to win you games and then the power play wasn’t going very well, so it was time the five-on-five stepped up a little bit.”

The one exception was forward Keith Aucoin. While his teammates were “sleepwalking” through the first two-thirds of the game, the minor-league call-up was flying around the rink doing anything and everything he could to impact the game.

During the second period Aucoin recorded a goal on his first-ever power-play shift with the Caps and later added an assist for his first multiple-point game with Washington. On a team in dire need of production from someone other than guys named Ovechkin, Semin, Backstrom and Green he’s quietly racked up points in four of his last five games (two goals, three assists). And let’s not forget that right now he’s tied with Hershey Bears teammate Alexander Giroux for the AHL lead in points with 94.

For a guy who has played just eight games for the Caps this year, you sure do look right at home out there. What’s really going on?

“I think playing with Carolina the last half of the year last season helped out coming into this year,” Aucoin said. “You know, getting the jitters away being on a new team and finally getting more ice time. I’m playing well and with a lot more confidence. I’m just having a lot of fun right now.”

You scored your second goal in three games. Can you walk us through the play?

“It was my first powerplay shift since I’ve been here and I didn’t know what to do, so [Brooks Laich] just said ‘go to the goal line,’” he said. “I saw Ovi go to the slot and I just went backdoor. He made a great pass and I had an easy job to do.”

[Editor’s note: Thank you Brooks. Now this team has two guys willing to crash the net.]

For our money, the Alexander Semin goal you set up was even prettier. How were you able to read the play and create a turnover against Ilya Kovalchuk, one of the league’s premiere players?

“Kovalchuk got the puck in the slot and I have a long stick, so I kind of got under his stick a little bit,” Aucoin said. “He lost it and I heard [Tomas Fleischmann] yelling for it and those two did the rest of the work. It was fun to be a part of it.”

Fans may not know much about Aucoin yet, but if he keeps playing like this that’ll change in a hurry. The Washington forward may be listed as 5’9”, but he’s making a big impact each and every time he hits the ice for the Capitals.

“Keith Aucoin has been great,” said forward Eric Fehr. “Every time he is in the line-up he’s been a spark plug for us. He’s a great passer, he’s got a lot of energy, and he hits well for a smaller guy.”

Defenseman Mike Green agreed with Fehr’s assessment and was quick to endorse Aucoin as well.

“He always seems to be in the right spot at the right time and his vision is incredible,” he said. “If he could hang around here for a little while longer I think he could produce a lot of points for us.”

Luckily for Aucoin, his teammates aren’t the only one taking notice of Aucoin’s high level of play.

“He’s definitely played very well for us,” said Boudreau, when asked if Aucoin’s play of late has earned him a roster spot come playoff time. “We’ll probably have to make a decision here sooner or later. He’s done really well.”

Aucoin was realistic when asked if he thinks his play should merit a roster spot in the postseason.

“You know, it’s out of my hands,” Aucoin said. “The only thing I can do is go out every shift and work hard. If they need me here, then I’ll be here. I’ll do what they need me to do.”

No offense to guys like Boyd Gordon and Matt Bradley, but we’ve always been of the mindset that your team’s fourth-line should be comprised of young (i.e. – hungry) minor-league type players in the mold of Aucoin. He’s scrappy, fearless and will absolutely do whatever he’s asked to.

“I think when you’re playing on the third and fourth line that’s what you got to do – create energy for the team,” he said.

The fourth line doesn’t get much in the way of ice time, but guys like that typically find a way to impact the game regardless. If he keeps playing like this, Boudreau and the rest of the coaching staff will have little choice but to find a roster spot for Aucoin come playoff time.

One final note – the quote of the night goes to Green, who earned a chuckle when asked about his team’s inspired play in the final period.

“Bruce came in here and gave us heck between the second and third and we responded well,” Green said.

Thanks to Aucoin for leading by example and to Boudreau for giving his players “heck” and waking up the rest of the locker room the Caps were able to pick up another two points in the standings.