green in a class of his own 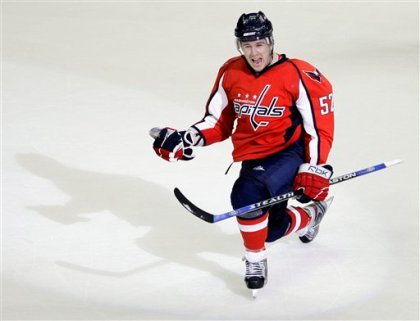 Far too many times this year the Washington Capitals have fallen asleep at the wheel when lining up to play one of the league’s bottom feeders and for one period it looked like history was about to repeat itself.

Luckily, the Caps had Mike Green on their side, who had a different plan in mind when it came to making history. The Capitals’ talented defenseman scored two powerplay goals in roughly 90 seconds to help propel Washington to a 5-3 win over the league’s worst team, the New York Islanders.

Green tallies gave him 30 for the season, making him just the eighth defenseman in NHL history (and the first in 16 years) to accomplish the feat. The 23-year-old also set a franchise record for most powerplay goals by a defenseman with 18. Not bad for a guy who missed 14 games earlier this season due to injury.

“As I used to say about Ovie, I’m not surprised anymore,” said center Nicklas Backstrom, who finished the game with one goal and one assist. “That’s what I have to say about Greenie now too. He’s a great guy and he has a lot of skills out there. He has a good shot and it’s good for our team to have that kind of offensive D-man who leads the team.”

Others were even more generous with their praise for Green on this memorable night.

“He’s special,” said defenseman Brian Pothier. “He skates better than most. He has a better shot than most guys. He sees the ice better. He’s stronger … I mean, he’s in a category all his own. He’s a special player and it’s fun to watch him play every night.”

Even those who haven’t been around Green much this season were willing to sing his praise.

“He’s the best I’ve seen,” said forward Keith Aucoin, who scored his first goal as a member of the Capitals. “I grew up watching Ray Bourque and he reminds me a lot of him, the way he plays. His hands are unbelievable, he can skate like the wind and he can score from anywhere. It’s a lot of fun to be a part of something like that.”

Critics say the only knock against him and the biggest reason he shouldn’t win the Norris Trophy, as the league’s top defenseman, is that he’s not as strong in his own end. What do you say to that?

“The thing about Mike is that he doesn’t really have to play in his own end because he has the puck most of the night,” Pothier said. “That’s the thing about him that’s so special – if he’s out there for 30 seconds, there’s a good chance he has the puck for at least 10 seconds. His knack for scoring powerplay goals, I don’t think anyone in the league is close to him. I’d put him right up there with the best defensemen in the league.”

One would think reaching a significant milestone that only seven other defensemen in NHL history have ever achieved would go a long way towards bringing home the Norris Trophy, but regardless of whether or not he takes home the hardware the fact of the matter is that the Capitals are fortunate enough to have Green, who is easily one of the best and brightest stars in the hockey today.