so which is it? 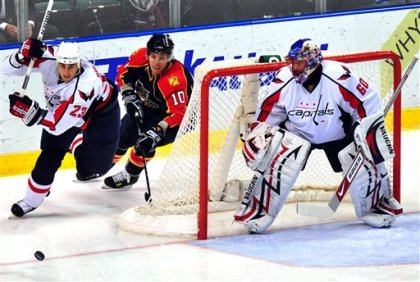 This is what makes the Washington Capitals must-see TV. Or maddening. You pick.

Just 24 hours after getting trounced by the lowly Atlanta Thrashers 5-1, the Caps responded with an authoritative 3-0 victory over the Florida Panthers Tuesday night. Most teams look better on the first night of a back-to-back set. But where’s the fun in that? Sure, these Capitals are as talented as any team D.C. has had over the last decade, but we’re truly starting to believe that they’re also bipolar.

Even if you missed the Atlanta game, one look at the boxscore should have been enough to guess how the game played out. The Caps took 50 shots but scored only once, which meant the team settled for long-range shots instead of creating traffic in the crease. The Thrashers scored three powerplay goals, which meant some players took bad penalties and defense apparently wasn’t much of a priority. Washington goalie Jose Theodore was pulled from the game after allowing four goals on just 19 shots, but it was a safe bet he wasn’t the only problem. Sound about right?

Well, thank the hockey gods for Bruce Boudreau. Thanks to him, this talented but still immature team rarely mails it in two games in a row. So last night the Capitals played inspired hockey. Players were backchecking. Defensive players were rarely caught out of position. The team got much-needed secondary scoring (which essentially means goals from people not named Alex). Instead of giving up multiple powerplay goals, the team actually scored a shorthanded goal against Florida. And in the end, Theodore secured his second shutout of the season. Sound about right?

And here’s the stat of the night – the Capitals did not allow a single shot by the Panthers in the third period.

“I’ve never been involved in a game where that’s happened,” Boudreau said in his post-game press conference. “It’s a great testament to our players. They proved they can do it when they want to do it. It was a total team win and we got that secondary scoring.”

Ahead 1-0 heading into the final frame thanks to Brooks Laich’s shorthanded goal from an impossible angle, the team clamped down in their own end and got the job done. Because they didn’t try to force the offense (remember that five-on-one breakaway over the weekend?) and just took what the opposition gave them while playing Capitals hockey, everything is right in the hockey universe, for another day or two at least.

Here’s the funny thing about these two back-to-back games – Theodore faced 19 shots in both affairs. When he was hung out to dry, he was pulled from the game. When his defense actually gave him a chance, he picked up a shutout. We know a lot of people think he can’t carry the load for this team, but we’ll continue to support the guy. Once he got over that awful habit of allowing a goal on one of the first two or three shots of the night from earlier this season, Theodore has been solid.

Of much greater concern should be the Capitals’ erratic defensive play, as well as the offense’s lack of desire to roll up their sleeves and get dirty. Viktor Kozlov scored the second goal of the game because Panthers goalie Tomas Vokoun was screened and never got a clear view of the puck. Good things happen for this team when guys crash the net, but it’s apparently much more fun to play finesse hockey and attempt to skate circles around opponents. If you want a reason why this team might not yet be ready for a legitimate Stanley Cup run, that’s it. Don’t take it from us, take it from Boudreau who has been telling his players as much all season long. It’s up to them whether they listen or not.