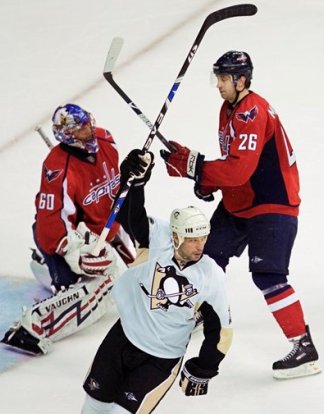 In today’s Washington Post, beat writer Tarik El-Bashir does a nice job of laying out the problems with the Washington Capitals offense during the team’s current four-game losing streak. While we agree that players not named Alex need to step up their offensive output, the more troubling aspect for us is on the defensive end.

We understand when Capitals general manager George McPhee says he’s not interested in mortgaging the team’s future to acquire a top-line defenseman like Chris Pronger from Anaheim. A price tag of Karl Alzner, Simeon Varlamov and John Carlson is definitely too steep for a rental player who, although still an impact player, would have to admit his best days are behind him. But in our humble opinion, the Capitals defensive rotation as currently constructed is simply too flawed to make Washington a legitimate Stanley Cup contender this year.

Mike Green might very well be the best offensive-minded defenseman in the NHL, but even he would have to admit his play in his own zone is still a work in progress. Tom Poti is easily the team’s best defensive defenseman, but he’s been saddled with injuries of late. If not for Alexander Semin, defenseman Shaone Morrisonn would be the object of Caps’ fans ire because he’s just as likely to make a bone-headed decision or take a ill-advised penalty with the game on the line.

The biggest problem though, is that the other three regular defensemen – Milan Jurcina, John Erskine and Jeff Schultz – all essentially play the same role. They’re all big bodies who should throw their body around and keep opponents out of the goalie’s crease. Ideally, one of the three would excel at this and free up other spots in the rotation for other styles of defensemen. But in Washington, we’re treated to one for the price of three.

Jurcina is easily the best of the bunch. He’s really improved his play and seems to have grown into the role and become more comfortable with who he is and what he brings to the game. We’ve heard for a while stories of his booming slapshot shattering glass panels at Kettler, but it’s only recently that he’s begun to assert himself more during actual game situations.

Erskine, who is nicknamed Dumb & Dumber by some Caps fans for his slight resemblance to Jeff Daniels’ character in the movie, plays a physical game as well and like teammate Donald Brashear, doesn’t mind throwing down to keep opponents honest. But at his very best, he’s nothing more than a sixth or seventh defenseman on an NHL roster.

Out of the three, Schultz is easily the most maddening. The former first rounder is only 23 years old, but we’re convinced he’s allergic to contact. When you’re 6’6” and 224 lbs., you shouldn’t be afraid to throw your body around or at least be willing to clear the crease when forwards are taking multiple swipes at a loose puck in front of your net. He’s averaging just under 20 minutes of ice time and has a plus/minus rating of plus 14, but it’s not because of anything he does.

He’s logging so much ice time on a consistent winner that the law of averages says he’s bound to be out there when Alex Ovechkin and friends do all the heavy lifting. His play is so suspect that friends in the press box automatically lean over and ask, “Was Schultz on the ice?” whenever the opposing team scores a goal. Like we said, he’s just 23, so there’s hope that he will follow Jurcina and grow into a competent defenseman. The issue is, this is a team built to win now. Had they been able to bring in one additional defenseman, preferably someone solid in the defensive zone, this team truly could have made a run at the Cup this year. As it stands now, the team has no choice but to roll the dice and wish for the best.

And a quick note to those media types who continue to question if goalie Jose Theodore is dependable enough to backstop a legitimate playoff run – if the Caps gave him six full-fledged, reliable defensemen, there’s no reason to believe Theo couldn’t get it done. But when half of the blueliners are solid and half aren’t, you get games like Sunday’s 4-3 loss to Pittsburgh, which featured breakaways, odd-man rushes and disappointment while the Capitals continue to search for answers. It’s easy to blame the goalie, but more times than not, he’s not the only player at fault when the opposition lights the lamp.