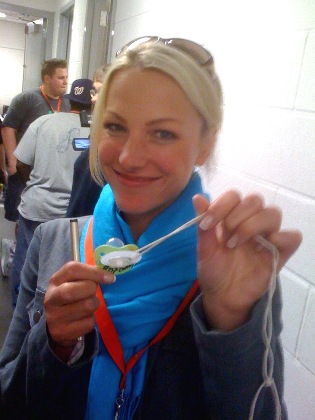 As everyone knows by now, the Washington Capitals lost to the Pittsburgh Penguins 4-3 in a shootout Sunday afternoon.

Sidney Crosby was the hero, scoring the game winner in the shootout for the Penguins, which was fitting since he was honored before the game when 500 Crosby-inspired pacifiers were handed out in front of the Verizon Center before the puck dropped. Channel 4’s Lindsay Czarniak was kind enough to model the pacifier after the game for those fans who weren’t lucky enough to score one of the giveaways.

After three wins and a shootout loss, the Capitals finish the season taking seven out of a possible eight points from the Penguins, not that they were patting themselves on the back after the loss.

“I thought we played well, we just waited too long – we waited until the third period to finally play our game,” said defenseman Mike Green, who had two assists. “It was a little bit too late, but we showed a lot of character coming back. We’re happy with one point, but we needed two tonight.”

You guys have been a little off your game these last couple games, but like you said, when you played your game in the third period, it looked like the Caps team that we’ve come to know and love. What do you chalk this rough homestand up to?

“I think when we play within our system, guys play short shifts and we do positive things that we’re pretty hard to beat,” Green said. “If we could play that way every night for 60 minutes, we’d win every night. At times we stray away, have breakdowns and shoot ourselves in the foot and other teams take advantage of us. We’re coming out of this slump and we’re starting to play our game again and it’ll be good if we can play our game.”

Would you say nerves or this team’s youthfulness has played a part in this slump?

“Maybe a little bit,” he said. “We’re young guys that are playing a lot of minutes, but we’re all smart guys. We’ll figure it out. If we’re going to play bad hockey, this is a good time – rather than in the playoffs.”

Typically, Caps fans would worry when they look at the schedule and see the team is away for seven out of the next eight games, but honestly this might not be a bad thing. The Capitals just found a way to lose four-consecutive games (all at home) for the first time since Bruce Boudreau took over as coach, so maybe a road trip is needed to help these guys regain their focus and get back to the solid hockey they played the first four months of the season. You never want to see your favorite team hit a slump, but like Green said, if they’re going to stumble, let it happen now instead of the playoffs.