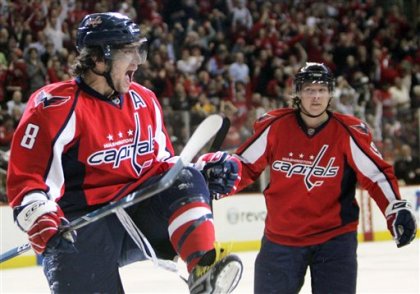 While other players on the Washington Capitals might be more flashy, top-line center Nicklas Backstrom is officially someone opponents need to gameplan for. He’s in the midst of an eight-game scoring streak in which he’s racked up three goals and eight assists, and even more impressive is that he’s currently ninth in the league in scoring with 66 points. All this at the tender age of 21.

We caught up with Backstrom and some of his teammates over the last week to find out just how good this kid is.

You’re currently in the top five in the league in assists, but it looks like you’re shooting and finding the back of the net a little more often these days. Have you changed up your game lately or is this just a sign of your growing confidence?

“I don’t know,” he said. “When I have an opportunity to shoot, I shoot it. Some games I have more opportunities to shoot than other games, but I can’t tell you what’s changed lately. I have to shoot more though. That’s something I’ve been working on.”

We think everyone’s kind of labeled you as a pass-first kind of player, so maybe shooting a little more often will continue to catch teams off guard, right?

“Yeah, if you’re going to have success, then you have to surprise them a little bit,” Backstrom said.

Not too long ago, you were struggling a little bit and were moved off of the top line. Since then, it seems you’ve really been playing better. What changed?

“I don’t know,” he said. “It’s a long season and sometimes you’re struggling. It’s going up and down all the time and if nothing works between me and Alex [Ovechkin], then I think it’s good for both of us to change other guys around us. Right now, I think we play good. That’s what’s most important.”

Hey Sergei Fedorov, Backstrom just seems to get better every month. What are you seeing in his development?

“I think he’s become more mature, as far as making plays,” Fedorov said. “Every night he realizes he’s got to work hard, and that’s what he does. Coach gives him lots of ice time and opportunity to play on the powerplay. If he works hard and plays right in all these situations I think he’s got enough hands and enough talent to get a lot of points.”

“He’s our best center man,” he said. “He’s sees the ice really good. I would say he’s unbelievable. His passes are unbelievable and I just think he’s going to get better. Way better, I think.”

One of the more underrated parts of his game because he typically is a pass-first guy. Does he have a good shot?

“Yeah, he’s got a pretty good shot,” Fleischmann said. “Every time he’s got a good opportunity to shoot, he takes the shot and usually scores. But he usually is looking more for Alex, and the combination is working, so why not?”