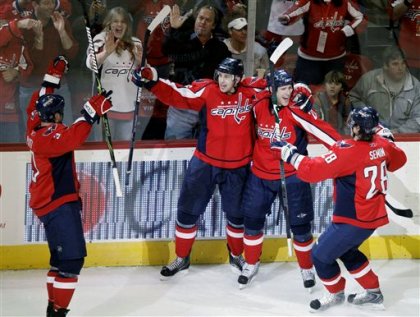 The Washington Capitals continued their recent dominance over the Pittsburgh Penguins with a 5-2 victory at the Verizon Center Sunday.

While the Penguins would not qualify for the playoffs if the season ended today, the game definitely had a playoff atmosphere with the fans fired up from the start and both teams trading hits and words throughout the physical affair.

In the end, the Caps secured their third-consecutive victory over Pittsburgh and we caught up with forward Tomas Fleischmann to get his thoughts on the battle.

How important was it for you guys to bounce back and get a win after the lackluster game against Colorado Friday night?

“We need to win when we’re at home and it was basically a great first period,” he said. “We skated with fast speed and had a great powerplay goal that got us going.”

This rivalry has been around for a long, long time. It certainly felt like a playoff game here today, right?

“Yes, exactly,” Fleischmann said. “That’s what I felt all game and it was really fun to play in.”

This one was pretty physical too. At times you saw some of the biggest names in hockey getting in each other’s faces and chirping back and forth to raise the stakes even higher, right?

“That’s what you expect from a game like that,” he said. “Like you said, it’s almost like a playoff game and that’s how we play in the playoffs. You know, it was a tough game on the boards and we got a lead 5-2 that made them start to get frustrated a little bit. We kept going and played our game and got the win.”

You’ve now won all three games against Pittsburgh this season. What do you chalk that up to?

“We got excited about these games probably and had more energy than usual,” Fleischmann said. “We chipped some goals in and that’s it.”

You’ve got 22 games left in the regular season. What’s the top priority for this team heading into the postseason?

“Keep playing the same way we did tonight and get in a better position for the playoffs,” he said.