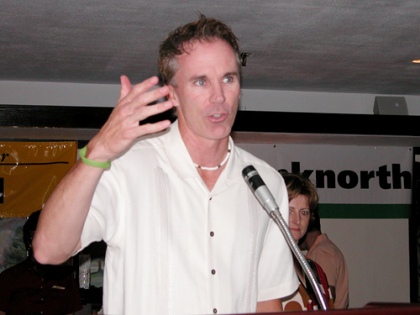 John Buccigross is an exception to the rule.

While ESPN has largely ignored professional hockey, the former NHL 2Night co-host has gone above and beyond to show the NHL some love. His weekly column on ESPN.com is a must read for any diehard, so we asked him to take some time out of his busy schedule to answer a few questions about the Washington Capitals. Thankfully, he agreed to play along.

Before we get started, we just wanted to quickly mention your fascinating NHL Mount Rushmore idea from last week’s column. You listed four players who best represent each of the 30 teams and for the Caps you selected Peter Bondra, Dale Hunter, Olaf Kolzig and Alex Ovechkin.

It’s hard to argue any of those four players’ merits, but our only suggestion would be to swap out Hunter for Rod Langway. Both were exceptional team leaders on and off the ice, but the Pierre Turgeon suspension drops Hunter slightly below the helmetless one for us. Either way, we sincerely hope Al Iafrate is the tour guide at the Caps’ Mount Rushmore.

Okay, onto the questions.

When it’s all said and done, where will Alex Ovechkin rank among the league’s elite? You’re already on record as saying he’s the best player in Capitals history, but will he be mentioned in the same breath as Gordie Howe, Wayne Gretzky and Mario Lemieux as one of the best to ever play the sport?

“I think that will depend on how prolific his goal totals end up being,” Buccigross said. “He has already proved to be one of the more unique players in NHL history. Really, who else compares? If he approaches 800 goals that would be interesting, but I wonder with Ovechkin’s style of play if he can have a long career. Either way he will go down as an NHL great and a player teenagers will grow up talking about and comparing subsequent players to.”

The other Alex, Alexander Semin, draws the ire of locals from time to time for what the team has called “selfish penalties” and a perceived immaturity. He’s only 24 and at times shows flashes of brilliance. Do you think these mental problems are something the kid will grow out of? More importantly, if you were the Caps general manager, would you feel comfortable signing him to a long-term deal?

“I do not think it is something he will grow out of,” he said. “I think it is part of his DNA. I would not feel comfortable signing him unless it was at a reasonable number. Durability seems to be an issue.”

We agree that Semin is probably never going to completely grow out of this. If the Capitals decided to trade him away for more pressing needs, what could they get for him? Which team or teams would match up well with Washington as a trade partner for Semin?

“That’s a tough question,” Buccigross said. “Semin is at $4.6 million next year and then he is a restricted free agent. He turns 25-years-old in March. He has 90-100 point potential, but he has durability issues. If the Capitals could extend him at $5 million a year, I would extend him for four years at that number after next season. If he is looking for $6-7 million dollars, I would deal him. Once you get to that number, durability and leadership have to come into the equation. No team jumped out at me as a natural fit. For some reason, Edmonton came to me.”

Mike Green is a guy who less than a month ago was somehow overlooked for the All-Star game, but now is being mentioned as a potential Norris Trophy winner. Do you think he’ll be able to beat out some of the more established names on the blueline and take home the hardware this year?

“I think it will be tough for Green to win the Norris because he is probably perceived only as an offensive type defenseman,” he said. “[Nicklas] Lidstrom’s reputation and Zdeno Chara, a captain like Lidstrom, will be tough to beat if the Bruins and Red Wings finish first overall in the conference.”

Just how far can the Caps get with Jose Theodore in net? With Brent Johnson sidelined do they need to make a move to be a legitimate Stanley Cup contender this year or does Theodore have what it takes to bring them their first championship in franchise history?

“That’s a great decision and it is a decision George McPhee has to make,” Buccigross said. “That decision will ultimately decide how far the Caps will go. I think Theodore has enough game to get it done, but is a slight question mark. The Capitals also must learn to play a little more responsibly defensively.”

If you’re running the Capitals and had to make one move between now and the trade deadline, what area is the biggest concern for you and what trade do you make?

“Probably a veteran forward who is defensively responsible,” he said. “Someone who can convince the team how important it is to play defense. The coaches can say all they want, but to have a teammate the players respect preach positioning and defense goes a long way.”

Where do Ted Leonsis and George McPhee rank among the league’s owners and general managers, respectively? We’re biased, but we can’t help but think Leonsis’ fan friendly ways are just what hockey needs and have nothing but respect for McPhee as well. He’s consistently able to turn a seldom used player like Brian Sutherby into a draft pick (in this case a second rounder), which he then turns into Christobal Huet just in time for a playoff run. Are these guys two of the best in the NHL or are we just homers?

“Both get A’s,” Buccigross said. “How about the Robert Lang trade? McPhee traded Lang to Detroit by Washington for Tomas Fleischmann, Detroit’s first-round choice, Mike Green, in the 2004 Entry Draft and Detroit’s fourth-round choice, Luke Lynes, in 2006 Entry Draft. How they drafted, traded and hired has the Capitals among the Eastern Conference elite.”

Finally, we’d like to simply ask you to share your fondest memory of the Washington Capitals organization, whether it’s something that happened on the ice or behind the scenes. It can be from back in the day or of the more recent “Rock the Red” era.

“My fondest memory will be on March 1st when I stand between the benches and get to hear Alex Ovechkin’s skate blades carve the ice from 10 feet away,” Buccigross said.

[Editor’s note: Capitals owner Ted Leonsis apparently approves of this interview. He posted a link to it called Hot Bucci Love on Homer McFanboy, which is great on about 20 different levels.]