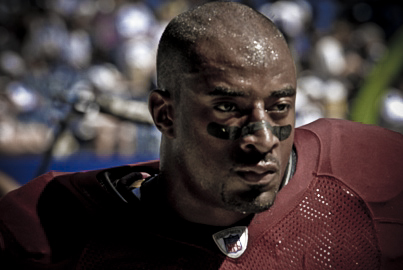 Although it’s the offseason, this is typically the time of year when the Washington Redskins make their biggest headlines.

With a creative and aggressive front office, the ‘Skins over the years have consistently managed to restructure deals with core players to free up salary cap space to be ready if/when the right free agent comes along.

With that in mind, it shouldn’t come as a surprise when the Washington Post announced last night that the Redskins had finalized new contracts with defensive end Andre Carter and wide receiver Antwaan Randle El. At this point it’s barely newsworthy (after all, these same two players have been down this very road before). Either way, we used this as an excuse to contact Carter and see how he’s enjoying his offseason.

Congratulations on the new contract. How did it come about? Did the team contact you and ask you to restructure your deal?

“That’s basically what it was,” Carter said. “It was more of a restructuring than a new deal. Honestly, that’s just how it is in this business. We did it to make more room for guys to come in during free agency or the draft. It was a decision to help the team because you never know in this business. I’m about to be 30 years old and anything can happen, so I’m blessed to be able to do this deal, and honestly, my perspective is to just take it year by year. I’m definitely back for the 2009 season and we’ll just kind of go on from there.”

Does this new deal really change anything for you? The breakdown in the Post seemed to indicate you’re getting the same basic amount of money, it’s just shifted into a different category for salary cap purposes.

“Yeah, that’s basically what it is,” he said. “With this, there’s just more up front and hey, any man would take it. Like I said, I consider it more of a blessing than anything. It just means I’ve got less to worry about, like whether or not I’m going to have a spot on the team. So I’m happy that Vinny Cerrato and Eric Shaffer, who is in charge of the contracts, got with my agent to say, ‘This is what we want to do.’”

Don’t you do this restructuring every year? Do you basically have a reminder on your calendar that says today is the day to restructure my contract?

“I think so, I think that’s how it is,” Carter said. “I’m not sure about other players because I haven’t really read anything, but that seems to be the case with me. I’m not really trippin’ about it, it’s just the nature of the business.”

So where you at these days?

“Yeah, I’m back in California,” he said. “I’m just enjoying the Bay area – seeing a lot of friends, doing a lot of stuff with our church and I’ll start doing my running and conditioning soon. I usually like to take a good month and a half off.”

Have you done any kind of vacationing?

“Me and my wife just went to Vegas, man,” Carter said. “We went for a few days on a little adult vacation. Other than that, we’ve got two kids, so we can only do so much.”

Did you win while you were in Vegas?

“Actually I’m not a gambling man, believe it or not,” he said. “I just rolled there to enjoy the festivities. We got some friends out there and I tried to get with Renaldo Wynn, he has a house out there, but we couldn’t touch base. No luck, but hopefully next time.”

You mentioned your offseason program. What kind of workouts do you do to get yourself ready for the first day of camp?

“Actually, I’m one of those guys that will do mixed martial arts,” Carter said. “It’s a combination of Muay Thai, kickboxing and boxing itself to work on my hand-eye coordination. It’s one of those workouts that’s really challenging because you think you’re conditioned, but this is a whole different level. You’re just moving nonstop, at a rapid pace, and moving different body parts.

“It’s a great challenge to go with the typical stuff like weightlifting,” he said. “For me, I like doing the explosive lifts. The power cleans, body squats and snatches, bench presses and typical lifts. Speed work wise, I do quick foot work – you know, five- and 10-yard burst out on the field. But that’s more for my position.”

Talking about lifting, some of that sounds like what Philip Daniels is into, right? Are you trying to get into the heavy lifting like him?

“Nah, I’ve been incorporating some of those workouts throughout my offseasons, but it’s not as extreme as his,” he said. “He’s much more into powerlifting, where he just puts on all that weight and does it. He’s a strong man. I’m good on the powerlifting. I get good weight in, but I’m not trying to beat up my body or anything.”

You mentioned Renaldo, have you been in touch with any other teammates, past or present?

“Yeah, I talk to Phil a lot,” Carter said. “Me and [Cornelius Griffin] text from time to time. I talked to Demetric Evans, Marcus Washington, Mike Sellers not too long ago. Lorenzo Alexander. That’s pretty much it. Those are the main guys I’ve spoken to.”

There have been some questions this offseason as to whether you and Jason Taylor can work as the starting defensive ends. Do you think the team needs to add some depth, or can you two get it done?

“I think we have enough to get it done,” he said. “Perhaps they’ll just bring in another guy to give us a little more depth, but with Jason it was tough. People have got to understand that what Jason has done in the NFL, he’s had great success. Granted, he was successful in a different scheme, but I think to a certain degree how he played in that particular scheme he was just more of an upfield pass rusher and he played the run well. Now, when he came to our division and our scheme, perhaps it handcuffed him a little bit because we do things a certain way. That’s just how it is when you go to a different team, man. It’s not going to be the same exact scheme or fundamentals that worked for you in previous years.

“I think Greg Blache and the rest of the organization will analyze everything, look at that and kind of see what happens. As far as his future with the Redskins, honestly, I don’t know. It’d be great to have him back, but I don’t know what will happen as far as they bring him back to be more of just a pass-rush guy for our team or what.”

Doesn’t it fall on the coaching staff to find the best way to utilize the players on the roster?

“Right, right,” Carter said. “It does. It definitely does, but this game is so unpredictable that you never know what’s going to happen. Overall, Jason’s been a great guy. I’ve enjoyed working with him and hopefully he’ll be back. Like I said, it’s a business though. If by chance he doesn’t come back, he’ll definitely be missed. It was an honor to play with him last season.”

We’re not going to ask for any insider information, but do you anticipate this being a busy offseason at Redskins Park?

“Honestly, it seems like every year is a busy offseason,” he said with a laugh. “So I’ll just go with the flow and guess it’ll be a busy offseason. For whatever reason it seems that Redskins Park is always busy. So no, I don’t think anything’s going to change.”