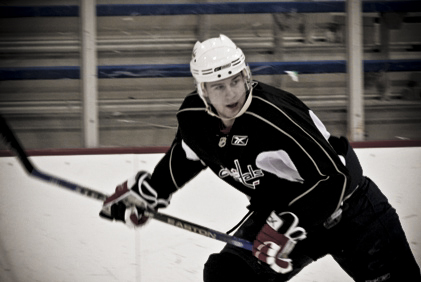 Mike Green leads all NHL defensemen in goals and points scored. Mike Green is second in the entire league in powerplay goals. Mike Green has more goals this season than All Stars Ryan Getzlaf, Henrik Zetterberg and Jonathan Toews, even though they’ve all played in more games this season and are, you know, forwards.

But that’s not what’s important. If you know nothing else about the future Norris Trophy winner, know this – Mike Green can kick your kid’s ass.

Hey Mike, we read a feature story on you last week on NHL.com that said you’re a big fan of UFC. What do you know about mixed martial arts?

“I follow it a bit, but it’s just a sport that I’m interested in,” Green said. “Mostly I’m interested in the training that they do to prepare for a fight. If you’ve ever seen it, it’s pretty incredible.”

We know you’ve got some buddies on the Washington Redskins. You should talk to Santana Moss because he’s incorporated some mixed martial arts into his offseason program. When we talked to him about it, he said it really helped with his conditioning. What appeals to you?

“It’s the most extreme training I’ve ever seen,” he said. “It would help you as an athlete no matter what sport you’re playing. That’s why it interests me. Hopefully here I can meet some of the guys and you never know, maybe they’ll bring me to a training session in the summer time.”

We know you’re a fan of Chuck Liddell. Which other UFC fighters are you a fan of?

“Obviously [Randy] Couture,” Green said. “He’s a legend. But another guy I like is [Georges] St-Pierre.”

Did you watch his fight against B.J. Penn?

St-Pierre definitely showed he’s one of the best in the business. So what would your style be if you ever stepped into the octagon?

Green’s two-goal effort over the weekend against the Florida Panthers extended his goal-scoring streak to six games, something no defenseman had done since Hall of Famer Ray Bourque back in 1984. If he scores again Wednesday night, he’ll tie the NHL record.

And let’s be honest here, as long as he continues this elite level of play, no one cares that Green is only capable of roughing up kids who still have to deal with chores and curfews. Score a few more goals and we’ll gladly help you pocket their lunch money.